Yesterday we went up to the mountains for the first time this winter.  Although I really don't like winter (the only real use of winter is to bring spring), I actually enjoy snow sports.  I skied a lot in college and also enjoyed snowmobiling with friends and would occasionally borrow my sister's snowshoes for an outing.  Brandon has tried to point out that if I like snow sports, that means I like winter because winter brings snow.  But I am happy to enjoy snow in places that I can travel to and enjoy warm weather in the places I live. 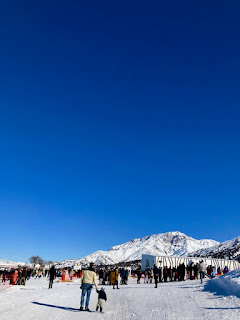 Since I now have seven children, however, the snow sport that I get to enjoy is sledding.  None of the other sports work very well with an infant and two-year old in tow.  We weren't able to find a really good sledding hill last winter, and so when I found out about a new resort opening this winter, I was excited to see that they had a tubing hill. 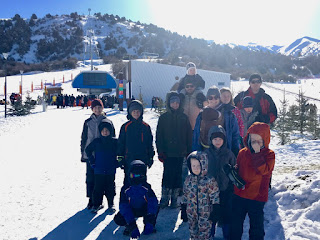 We had originally planned to go on Monday for the MLK holiday, but the weather looked better for Saturday, so we switched plans at the last minute and invited some friends along.

We eventually arrived around noon after a late start, and the weather was perfect.  It's been grey, cloudy, and smoggy in Tashkent almost non-stop since we came back in December, so it was wonderful to get up above everything and have a crystal-clear sunny day up in the mountains.  Everyone had warm enough clothing, so there was no complaining about numb feet or hands. 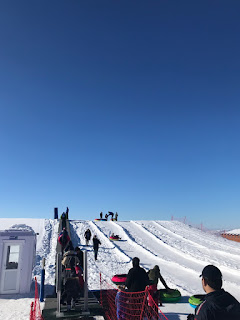 Unfortunately, about half of Tashkent had the same idea we did so the resort was packed.  The only other ski and sledding options in the mountains are Soviet-era relics that don't even come close to deserving the name 'resort,' so it seems that everyone else is as excited as I was to try something new and actually functional.

The resort itself seemed to actually be well run and felt like a smaller version of the places I skied in college (with a lot more Uzbek women in high-heeled boots).  It had equipment rentals, clean bathrooms, and several restaurants including one that served plov - because who wants to go skiing if you can't have plov for lunch? 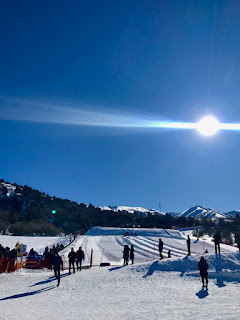 Paying for the tubing was somewhat frustrating because we didn't have a clear idea of how the system worked and the cashier couldn't understand that we really, actually wanted to purchase eighty rides for eight different people.  We ended up buying six cards with ten rides loaded on them, and then headed out to the tubing runs.

There turned out to be two separate areas, one for younger children and the other for older children and adults.  For a country that doesn't believe in seatbelts or carseats, I've found Uzbekistan has strangely restrictive policies for rides - it's not like small children will be harmed by going down a big hill versus a small hill.  We've also run into this at the water parks and amusement parks.  When we went to the NC state fair, Eleanor and Joseph rode rides that Kathleen wouldn't be able to ride in Tashkent. 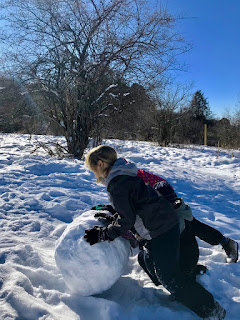 The younger children were disappointed at being relegated to the 'baby' hill, but soon realized they had the better deal when we saw the line to the big hill.  After watching Eleanor take two or three rides, I walked over to the older kids and found that they had only moved about ten feet since they had gotten in line.  It wasn't helped by the elbow-throwing locals who pushed past in line until everyone joined up and blocked them from any more encroaching. 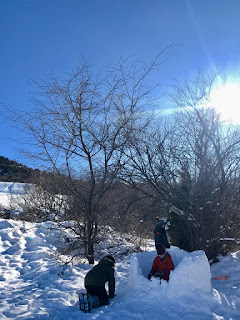 Thankfully we found a clearing next to the sledding hill where the children were able to play in the snow or the day might have been disappointing.  Driving over an hour and a half to take ten slides and throwing elbows in a ten-minute line for every ride (at ninety cents a ride) doesn't sound like a very good deal to me. 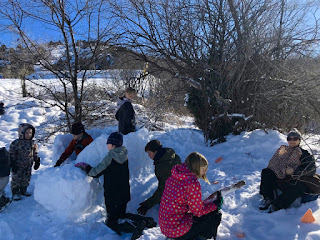 Happily, lunch turned out well - it was good, fast, and cost around four dollars a person.  And as a bonus, there was a TV showing cartoons to keep the children (all at their own table) quiet while eating their food.  It's wonderful to enjoy tasty lunch with friends while (most of) our children mind themselves. 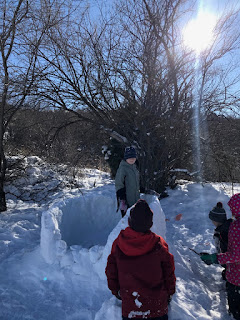 The day ended up being pleasant enough and everyone had a good time, but I'm not sure if I would go back to go sledding.  It was more that I'd like to spend on sledding (fifty dollars) when we own sleds and it's free if you can find a place to sled.  I also didn't care for the crowds and lines.  However, it was nice to have a hot lunch and a clean bathroom.  If I had the chance to go back and ski (without the children), I'd go because the skiing looked to be fairly decent, if limited.

But, it was nice to get out of town and have a beautiful day in the mountains.  I certainly won't complain about that!

Posted by Sherwood family at 11:08 AM