This week we celebrated William's birthday.  I find it so strange that my penultimate baby is three years old.  This means that I have will only have one more one year-old and two year-old and then I won't have any more babies left.  I feel like William was born so recently, so it's surprising to realize that he is already three years old. 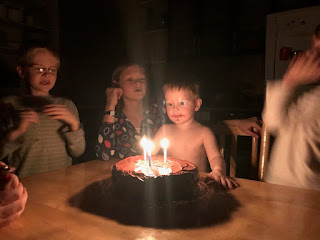 He is somewhat like the little girl with the little curl right in the middle of her forehead.  His disposition is generally sunny and cheerful, with an unfortunate penchant for calling people 'idiot' and 'stupid' when they cross his will.  It's hard to be too displeased with him, however, as it's so funny when he does it.  Kathleen would have been sent to her room for half a day for being so sassy, but William just gets laughed at.  Such are the privileges of being the sixth child. 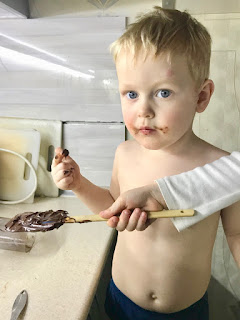 Much to his older brothers' dismay, he has a deep love for any LEGO creation that is a vehicle and attempts to snatch them whenever he can, climbing tables and bookshelves to get to them.  He joined the boys' club back in September and has discovered the joy of bothering his older brothers every night during bed time. 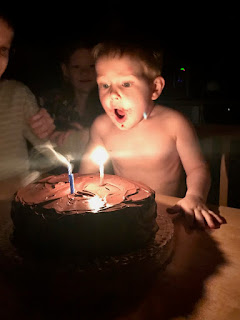 His preferred clothing is still undies and nothing else, despite the winter weather of February.  Last week I went outside to find him running around in fifty-degree weather wearing snow boots, underwear, and nothing else.  Thankfully it was not in the street, so the neighbors didn't have one more thing to be dismayed about their crazy American neighbors. 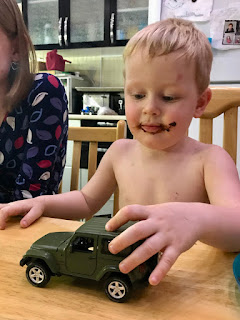 We didn't do much to celebrate his birthday; he doesn't have a favorite meal for dinner or preference for a fun family activity.  So we celebrated with a cake, candles, and a few presents which were enough to delight his little three year-old heart.  It's quite easy to make a three year-old happy. 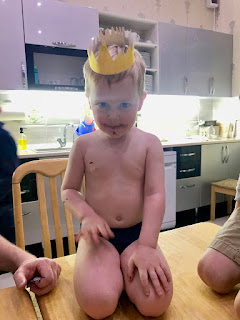 Despite his amazing temper tantrums, we are happy to have William as part of our family.  His cheerful smile, endless energy, and gift for quoting movie lines bring sunshine to everyone's lives.  Happy Birthday, William!

Posted by Sherwood family at 10:28 AM