Thursday was Edwin's birthday.  I have always pitied people whose birthdays come on or around Christmas.  Everyone gets so wrapped up in Christmas preparations that those birthdays often get overlooked.  My birthday is almost a month after Christmas and I find that much proximity obnoxious.

Edwin has had the triple distractions of Christmas, Joseph's birth, and moving to contend with his birthday celebrations.  Luckily for him and us, he has no concept of birthday, presents, or celebrations.  When Sophia turned two, we had spent the previous two weeks singing Happy Birthday to anything we could think of.  Thursday morning the girls and I sang to Edwin.  He just looked at us and ran off to play with his cars.

Although he is oblivious of celebrations, Edwin can certainly appreciate food.  So when we made cupcakes (going with the theme this year of making things easy on ourselves),
he was happy to lick everything given to him. 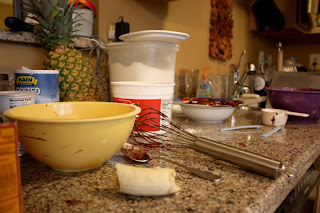 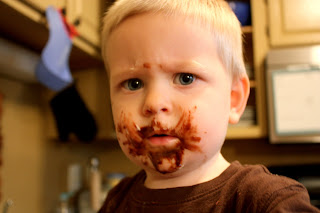 And fish out of the sugar canister, for good measure. 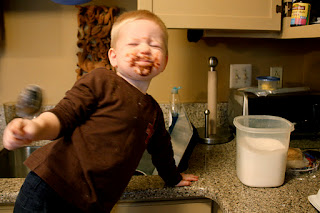 That evening we sang to him again, lit the candles, and had cupcakes. 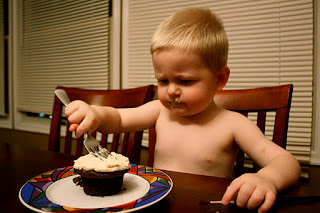 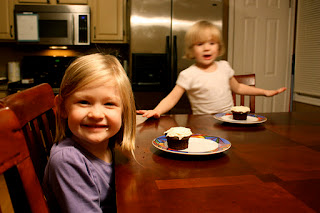 Edwin broke tradition by actually eating some of his birthday (cup)cake.  But only because he didn't know that present was coming. 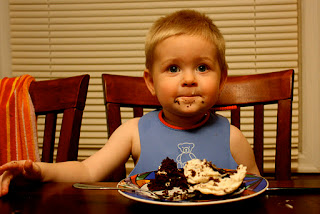 And he was thrilled with that only present - a big dump truck.  Happy Birthday, Edwin!

Posted by Sherwood family at 10:57 AM

Cute kid! Good pictures! I'm glad you didn't pull your mother's trick where you declare the birthday to be some more convenient time, like March or never.

So cute! Boys are so messy! Hehe! A big dump truck is a perfect present! Our boys got exactly three presents each for their Christmas birthdays. (Oh, I know the joys...) One from each set of grandparents and one from us. I love simplicity. :D

I love the pictures with him helping make cupcakes! Looks like a great birthday. I hope you all are doing well.