I have come to realize that I can't do it all.  I have three children, I have a husband, I have a large apartment, and I also have some things that I like to do.  Occasionally these interests conflict with each other and something has to give.

Interest #1: My children.  I like to dress my children attractively.  Whenever my mother would fly with five children, she dressed us as nicely as possible so as to give the appearance of responsibility.  I attempt to follow the same principle.  Even if I have three young children, at least they appear to be well cared-for.
Interest #2: Food.  Although this interest is often for the benefit of the previous one, #1 often gets in the way of #2.
Yesterday I started my holiday baking so that #1 would be able to enjoy Christmas better than Thanksgiving.  As with any cooking that involves baked goods, the children wanted to be involved.  Kathleen stayed around for some chocolate but then wandered off after awhile.  Sophia, however stayed until the bitter end and became thoroughly coated in my efforts. 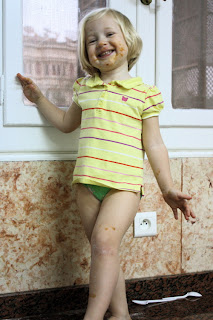 We try and keep up appearances, but sometimes, that doesn't work out as well as I would like.
Posted by Sherwood family at 7:43 AM

I am SO with you on keeping kids well kempt in certain public situations. Strangers allow for more outbursts of misbehavior when the kids doing it are super cute. :)

What a great picture!!