I guess I could have used the exercise anyway

Every morning (that Brandon is working), Kathleen and I go running. I say Kathleen and I because Kathleen comes along in her stroller; she certainly isn't doing any running. As the mornings are a little chilly, I put her blanket in her stoller to keep her warm. So off we both go, me pushing and Kathleen sitting like a little princess in her chariot, calmly sucking her thumb and watching as the scenery (slowly) passes by. Our run is almost four miles, long enough to tire me out fairly well. Kathleen, as well as I, know when the run is almost done and giggles and claps as we approach home.

This morning we were almost done; Kathleen was giggling and I was crossing the street for the last uphill block before home, when I glanced down at her. No blanket. I looked behind. No blanket. And for good measure, I looked underneath. No blanket. I considered briefly; Brandon wouldn't be home with the car until this afternoon, and by that time the blanket would most likely be gone. Kathleen has quite a few blankets, but I didn't like losing one of her favorites. One never knows if they'll take to the next one quite as well.

So, with some annoyance, I turned the jogging stroller around. And Kathleen started howling - loud, jagged cries that I was sure the whole neighborhood would hear and wonder what I was doing to my child. As there was nothing to do for it, and it was her own fault for tossing her blanket overboard, I kept running. I kept running as people gave me shocked stares, kept running as it started to rain, and kept running as there was no blanket in sight. Finally, a third of the way back, I saw it - pink, fluffly, and sitting in the middle of the sidewalk. As to how she managed to drop it without me noticing as I ran over her blanket, I'll never know.
Posted by Sherwood family at 11:02 AM No comments:

As they have not been here very long, and been mobile even less time, small children seem to be exceedingly curious. The only problem is that their curiousity sometimes leads them to explore things that perhaps better sense would tell them to leave alone. This morning, after enduring the stink long enough, I took Kathleen's diapers out to the trash. Her diaper pail is a small step-pedal one with a lid. When I returned, I found her chewing on the lid.

Every evening, Kathleen gets a bath. If perhaps you question the necessity of a small child having a bath every night, you've never seen them after crawling around the floor and backyard all day. Our bathtub is equipped with the usual soap-holder, in which we keep our soap. Thus far, Kathleen has not been too interested. Yesterday evening I heard her coughing, and looked over to see her sticking her tongue out with some measure of disgust on her face. She was chasing something underwater, and I saw that it was little bits of soap. Intrigued to see if she would like some more, I helped her catch a bit, and then watched as she made the same face while spitting it out. However, as soon as she dropped it, she started fishing again.

I have a mug that I like to keep cold water in. Kathleen is fixated on it whenever I have it out. This morning I went outside to move the sprinklers, and came back inside to find her splashing in a big, wet, puddle on the carpet, right next to my now-empty mug.

Brandon told me once of a TV show where it showed animals in the savannah all getting together around a tree surrounded by fermenting fruit and having a party together. The footage was complete with weaving animals, clearly drunk. On our morning run, Kathleen and I pass by a house that has several apple trees. Some of the apples have fallen, and the owner has piled them up in a grassy, treed area near the house. This morning as we rounded the corner past the now two-week old apple pile, I smelled the sweet aroma of fermenting apples. Evidently the local deer had smelled it too; as I looked over at the apples only a few feet away, he looked at me, froze for a moment, and then bounded off. Was it me, or did he weave just slightly?
Posted by Sherwood family at 1:09 PM 2 comments: 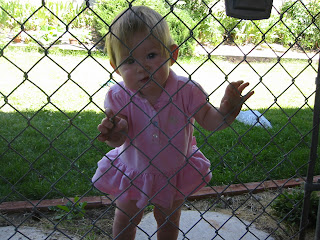 For those of you who like those things, we have some new pictures (mostly of Kathleen) on our Picasa web site.
Posted by Sherwood family at 12:15 PM No comments:

I'm not normally one to complain about the heat, especially after spending the two past summers in Egypt and pregnant, but I wouldn't mind if Utah cooled down just a little. This afternoon, at 1 o'clock, Kathleen and I have a birthday party to attend. Outside. At a park. With no mature (shady) trees. With a forecasted high of 98 degrees. And we have to walk there. At least she has a sundshade on her stroller. Thankfully, it is less than a half mile away, or I think we might melt before we get there.

Everyone likes to say that the heat in Utah is a 'dry heat.' I can appreciate that, especially as I sit in our backyard, in the shade, in the afternoon. The shade feels at least 15 degrees cooler than the sun. However, when you're in the sun, the sensation is something akin to broiling inside a very hot oven, with the direct, hot, piercing, dry rays of the sun beating down on you.

I grew up in North Carolina, where some like to call the heat a 'soggy heat.' I remember going running in the afternoon and coming home with every article of clothing (including sometimes my shoes) soaked from the soggy heat. But at least I didn't become dehyrated, because the air I breathed hydrated me. And even if you didn't get much, if any, cooler in the shade, when you were in the sun you didn't get roasted alive. I would call it being steamed alive. I prefer a soggy death to a roasted one.

Thankfully, we'll have a respite from the dry, unending, sunny, heat when Brandon, Kathleen, and I head out to Missouri in a week. Earlier this week we enjoyed a brief rain shower, lasting for the duration of my run - the ground was dry when I left, and the rain was almost completely stopped when I got home. Kathleen was fascinated, viewing the whole event from the safety of her stroller, with a shade. Hopefully she'll have quite a few more rains to enjoy when we go to the land of soggy heat. I, for one, wouldn't mind a few cloudy days.
Posted by Sherwood family at 11:53 AM 1 comment: 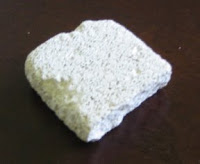 When I was around Kathleen's age, my parents took my older sister and me on a hike to Hanging Rock, in North Carolina. As family legend goes, I took a fancy to rocks, or perhaps thought that I was a chicken, and ate quite a few. I have never understood how a child can eat rocks - they certainly aren't tasty and should be rough on the way down. Well, like mother, like daughter, I suppose. 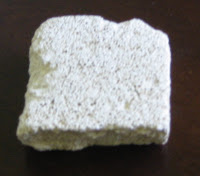 Monday afternoon, Brandon and I were at home, and Kathleen was crawling around, exploring. Brandon heard her coughing in the bathroom and rushed in to see what razor or shampoo cap she had swallowed. Instead he found a piece of pumice, with large bite marks newly incised into it. Evidently she wants to grow up and be a bird, too.
Posted by Sherwood family at 12:09 PM 1 comment:

Or perhaps, happy fifth of July. As Brandon had work off yesterday, we were able to celebrate the Fourth of July with something other than an early bedtime (although that was in effect, also). We have decided that our family policy on holidays is to treat them like holidays - so no pulling weeds, cleaning the house, or other necessary things are allowed.

So, to follow our family rule, we decided to go on a family outing - a walk along the Provo River Trail. As one could guess by the name, the trail follows the Provo River until it empties into Utah Lake. I would have rather been out on a speedboat with half of the population of Utah on the lake, but as we have no speedboat and no friends with a speedboat to mooch off, we contended ourselves with a quiet, and drier walk. I enjoy the Provo River Trail because it has something that most of the valley is devoid of - trees that weren't planted and aren't watered. It reminds me of where I grew up, in North Carolina. Of course, the trees don't occasionally break to views of mountains, but nothing is perfect.

Kathleen's favorite part of the walk was seeing, and petting, the horses that pastured alongside the trail. She seems to have an affinity for them, probably because they're so big. She also enjoyed dipping her feet, her hands, and attempting her head, in the river. And for most of the walk she contradicted her maxim of preferring home to anything else.

Yesterday afternoon we invited Brandon's siblings, Ashlie and Nick, over for hamburgers, homemade potato salad, and homemade mint ice cream. Having recently acquired our first grill, we made good use of it in creating carcinogen-enhanced meat, as that is is only way to enjoy a good hamburger. And to celebrate the founding of our country, we watched a movie about a good English-French war, Henry V, with Kenneth Branaugh. Unfortunately, we didn't see any fireworks, as bedtime was early, but we did hear some. All in all, not a bad Fourth of July!
Posted by Sherwood family at 12:17 PM 2 comments:

Pictures of our House 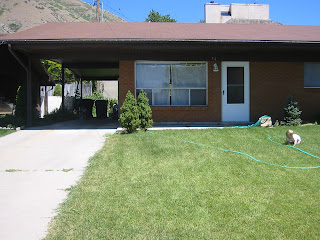 For all of you curious devotees, we have just posted pictures of the duplex that we moved into at the beginning of May. Enjoy!
Posted by Sherwood family at 11:14 AM No comments: