The Groundhog Was Wrong

When we moved to Dushanbe back in 2014, I geared myself up for a long, cold winter.  After all, Dushanbe is right next to the mountains and in Central Asia, so that meant that I was going to actually have to learn how to cope with winter.

I learned a few months later that my calf-length down coat was going to spent most of the next eight years hanging up in my closet.  I think that I can count the times I've worn my bright red cold-weather coat on one hand.  I don't think I've ever worn it here.  It turns out that there are two parts of Central Asia - the cold parts (Kyrgyzstan and Kazakhstan) and the not-so-cold parts (Tajikistan, Turkmenistan, and Uzbekistan).

So in January, when winter got really 'cold' - where the temperature didn't get above freezing for at least ten days straight - I didn't worry too much because winter here is pretty much a six-week long season.  It takes a long time to really settle in and starts its exit by the end of February.  The ski season might stretch a little longer than two months, but I'm pretty sure it's never had good snow for three solid months.

We can depend on apricot trees blooming by the first of March, and though there may be a rogue snow storm or a week or two of cold, rainy weather in during the Month, winter has lost its power and we can expect a lot of fine, warm days in late March.  I like winter that way.  I prefer it as a something that makes spring possible, but not much more than that.

This year, however, winter has given up the ghost pretty early.  I looked over our wall a few days ago and noticed that our neighbor's apricot trees were just about to burst into bloom.  Today Joseph and I took a walk in flip-flops and t-shirts, pushing Elizabeth in the stroller while she happily kicked her bare baby feet.  The weather forecasts claims that we will reach the upper seventies by Thursday before dipping into - gasp! - the fifties next week when some rain comes through.

I'm really enjoying wearing a t-shirt in February.  It feels so indulgent to be able to open the back door while cooking in the kitchen so I can enjoy some of the bright sunshine.  Sending the children outside to play is much easier when everyone just throws on flip-flops (or not even that) and runs outside.  They definitely play much longer when toes and fingers aren't going numb.

I know that we won't have unbroken warm weather until spring begins in earnest next month, but I'll take this warm spell, not looking a gift horse in the mouth.  After all, every day that it isn't cold is one more day closer to real spring where it will be warm reliably and I can enjoy all of the delights of green grass, flowers, and flip-flops.

This spring is also my last spring in not-cold part of Central Asia, so I'm working extra hard to enjoy all of the sunshine, blue skies, and above-freezing weather.  Nur-Sultan hasn't seen temperatures above freezing since last year, and can't even begin to think about a thaw for another six weeks.  I know that I'll remember these warm February days with fondness when I'm getting acquainted with a block heater in two winters.

But for now, I'm going to enjoy my early spring.  It turns out that Phil might have been right about the US, but he was dead wrong about Uzbekistan.

Posted by Sherwood family at 10:17 AM No comments: 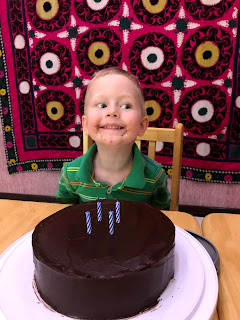 Today William turned four.  His birthday is actually this coming week, but I'm not a stickler about doing things on their exact dates if other dates are more convenient.  We've had several Christmases on a day other than December 25, and everyone was just as festive.  Brandon has a busy schedule this coming week, so celebrating on a weekend made more sense this year.  Plus, William isn't that aware of what dates are.  And also, who would argue with having their birthday early?

For his birthday activity, we went to a local trampoline park.  We hadn't been in maybe a year (definitely not since March), so Elizabeth had a whole new world to discover and was beyond excited to have an entire room full of trampolines to crawl on.  I had to laugh as I watched her crawl from trampoline to trampoline, stopping to sit and bounce on every single one.

I don't usually bounce with the children, but had to watch Elizabeth this time, so Kathleen and Sophia cajoled me into showing them my trampoline flipping ability.  It's been a long time since I was young and (much more) reckless, and although I pulled off the flip, it was a lot scarier than flips used to be.  William took advantage of my presence and made sure that I spent a lot of time jumping with him.  Which was fair, as it was his birthday Saturday. 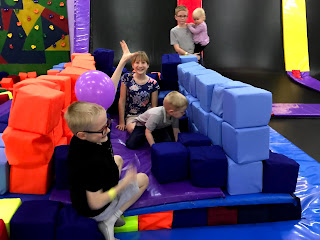 The fun continued with lunch at a restaurant (also not done in over a year) and William's choice of movie for the evening.

Today we had his birthday meal of choice, spaghetti.  I have never made spaghetti in my entire life, so when he started asking for it, I couldn't figure out where he had even heard of it, much less eaten it.  Then I remembered that his current favorite book is Spaghetti With a Chance of Meatballs (because who doesn't love a book about food??), but I still couldn't figure out where he had eaten it, until I recalled his play dates at a friend's house.  I asked my friend if they had ever eaten spaghetti for lunch, and she said that yes, but only once.  But for William, I guess once was all it took.

One of the best parts of little kid birthdays is how easy they are to please.  For his present, I sent Sophia down to the local grocery store, where she picked out a set of three little cars for him.  She and Eleanor (the only currently solvent siblings) also bought him a set of little cars, and he was wildly happy when he opened his present.  My mom had asked for suggestions for a grandma present, and I told her not to worry because: 1. He's only four and doesn't need much more than a simple present, and 2. We're going to be getting rid of lots of toys in a few months anyway, so why buy more toys now? 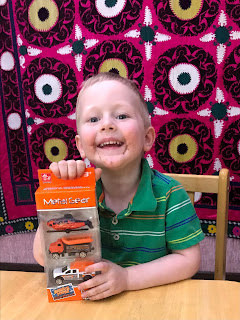 So for William, it was a perfect birthday.  He got to make all the choices, blow out the candles, have cake, and add more cars to his collection.  I think that we could all learn a lesson from the happiness of four year-olds.  Happy Birthday, William!

Posted by Sherwood family at 10:54 AM No comments: