Once upon a time there was a beautiful young maiden, Branley, who fell in love with a handsome young (well perhaps not as young as some) man, Ashdon.  While courting, Ashdon told Branley all of the thoughts and desires of his heart, one of which was to become a potentate of a small tropical country.  Branley was much pleased to hear of Ashdon's ambitions.
The two were soon married and spent a honeymoon and a little more in Egypt, where Ashdon was schooled and learned more about the ways of potentatedom.  After returning and finishing schooling, Ashdon sought his dream career and began the process of gaining employment.
As tropical countries are in short supply and the ranks of those desiring to absolutely govern them are long, the process would take a long time.  And so, in order to feed his growing family, Ashdon took a job at the nearby lasagna mine.  Hours were long, and work unpleasant, but Ashdon was fueled by love for his family, a dream of his future rule, and a great fondness for having food to eat.
The time passed.  Branley bore Ashdon his first child, a girl called Kathia.  The interviews continued.  Time passed.  Branley and Ashdon moved from the family manor to a larger place of their own, where Branley conceived a second child.  All was well, even if Ashdon vehemently disliked his job and smelled of tomato upon his return home.
And then one fateful day, disaster struck.  A letter came in the mail from the powers-that-be.  After many months (eighteen), the powers-that-be had decided that Ashdon lacked the qualities of a future potentate - namely mental stability, or rather the lack of it.  Everyone knows that absolute rulers of tropical countries must be inherently unstable, and Ashdon had shown by holding down his lasagna job that he was just too stable.
What was the poor family to do?  After all, there is only one power-that-be, and they had shut the door on Ashdon's dream.  Ashdon and his wife began thinking of other careers.  Perhaps the army - one can always achieve absolute power by a military coup.  Or maybe teaching - one can always gain a post teaching a future potentate and still inhabit a tropical country, even if one does not rule it.  As one last attempt, Ashdon applied to join the Foreign Service, reasoning that diplomacy is the art of letting others have it your way, and thought not being able to rule a tropical country, he could at least live in one.  But his hopes were small.
Eventually Ashdon turned his back on his dream and sought another career - nursing.  He and Branley  prepared to go back to school following the birth of their second daughter, Sopheen.  Shortly following Sopheen's birthday, the happy couple received news of their acceptance to the Oral Asessment, the final step before being cleared for a job with the Foreign Service.
There was great rejoicing, but great trepidation, also.  Most did not pass this step, and who was Ashdon to think himself better than others?  Nevertheless Ashdon did pass and began waiting anew for another dream.  Meanwhile he worked on his Mathematics and continued to prepare for nursing school.
After being placed on the waiting list following security and medical clearances, Ashdon waited, as he had done for two and a half years.  Would he achieve his dream?  Would he avoid returning to school?  Would he be abble to meddle in world politics and work under Hilary Clinton?  Only God knew, for Ashdon did not.
And then one day, January 22 to be exact, one year after beginning the process with the State Department, he received an email (parchment having gone out of style while he was waiting) inviting him to join the next Foreign Service Officer class on March 2.
And there was great rejoicing, and the lasagna mine was told to take their job and stuff it, and many suits were bought, and much luggage, and dreams of living abroad were once again allowed to flourish.
And they lived crazily ever after.
The End.
Posted by Sherwood family at 11:29 AM 6 comments:

My last figure in the numbers post was incorrect.  The temperature this morning was not nine degrees, but in fact seven degrees.  I have never before had icicles form on my eyelashes and try to fuse the top and bottom eyelashes together.
Posted by Sherwood family at 11:30 AM 3 comments:

This evening, Brandon hauled in the offending wheel to change the tube that was obviously trashed.  We pulled out the new, thorn-resistant tube and I pumped up the old tube to find the unfixable flat that tire slime couldn't fill.  I pumped, found the hole, and then watched as green slime bubbled to fix the flat.  Evidently the tube was not trashed - the slime had simply frozen into a solid lump this morning in my tire and couldn't slide around the inside.  And that is why I'm going to convince Brandon to retire to Tahiti.
Posted by Sherwood family at 11:22 PM 2 comments:

Time Brandon got up this morning: 3:30
Time I got up this morning: 5:40
Time Kathleen joined me for my supposedly solitary breakfast and scripture study: 5:45
Time Kathleen was supposed to get up this morning: 6:30
Time I finally got through with fixing breakfast, feeding myself, Kathleen, and Sophia (twice), cleaning up breakfast, and getting the girls dressed: 6:45
Degrees outside this morning: 9
Minutes it took to put on my running tights, turtleneck, hat, gloves, two jackets, Kathleen's boots, sweater, two pairs of mittens, hat, coat, Sophia's coat, hat, mittens, bundle-me, blanket, and wrap Kathleen up in a blanket: 15
Minutes we walked up the hill before realizing the tire was flat: 8
Minutes we ran down the hill to go back home to fix it: 3
Minutes it took to figure out  how to pump up the tire with my new bike pump: 10
Number of swear words I would have liked to use: 15
Number I didn't use because I had my children with me: 15
Minutes we walked back up the hill before finding the tire flat again: 3
Minutes it took to haul everyone out of their gear again: 6
Total time spent on the ordeal: 45
Total time running this morning: 3
Times I'm going to try again this week: 3
Degrees it's going to be every morning this week: 9
Some days you wonder why you even try....
Posted by Sherwood family at 9:40 AM 4 comments:

Everyone has their own particular brand of insanity, a special type of insanity that they secretly treasure and are proud of being insane about. Despite our protests about disliking this particular character quirk or habit or possession, we are proud of having it, and look for ways to denigrate it as a subtle way to proclaim that yes, I really do like having this particular thing or trait or routine. But we'd never openly admit that we like it deep down inside.

Mine is running. And so now I'm simply going to brag. I went running this morning. It was dark (all of the streetlights and car headlights were on). I was pushing two children (who are starting to add up weight-wise). We ran over snow and ice. And it was nine degrees outside.
Posted by Sherwood family at 1:37 PM 3 comments:

We should get Disney in on this

Recently Kathleen has started a few new behaviors: she's been potty-trained, she's started really talking, and she's started imagining things.
So this morning after flushing the toilet (from the fifth bathroom trip this morning), she commented that the potty was making music and and that I should sing to the music.
Now, what song does one sing to a toilet flushing?
Posted by Sherwood family at 10:04 AM 3 comments:

Sometimes I put ponytails in Kathleen's hair.  Kathleen loves ponytails.  She loves them so much that she will willingly have them put in her hair while she sobs loudly, sobs that are occasionally punctuated by yells and screams.  Who knows what the neighbors think.
Today while sobbing with tears and snot dripping down her face, another exclamation passed her lips.  'Thank you,' she sobbed, unprompted, in the middle of her ordeal and then went back to crying.
Posted by Sherwood family at 9:24 AM 2 comments: 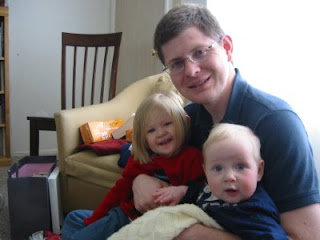 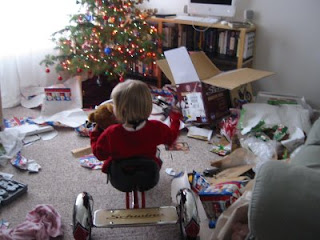 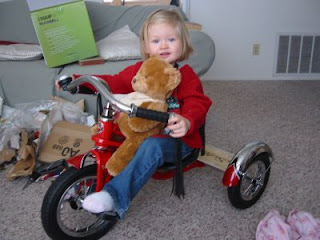 One of my favorite parts of Christmas is Christmas dinner.  Brandon and I start planning at least two weeks in advance, dreaming of all the delicious things we get to bring to life, and then eat.
This year was no different.  By Christmas, our refrigerator was full of good things to eat: lamb, artichoke hearts, mangoes, cream, tomatoes, sparkly drinks, oranges, cheese ball, veggies.  And most of them are still there, including the lamb.
But what did we eat for dinner, you ask?  Leftover Chinese food, brought over by Brandon's aunt on Christmas Eve.  None of it, however, was duck.
Posted by Sherwood family at 5:13 PM 2 comments:

Who knew lollipops were so popular?

One of Archimedes' more famous quotes claims that if one could 'give me a lever long enough... I shall move the world.'
Various unsuccessful attempts have been begun to try and potty train Kathleen, and all have been abandoned with hand-wringing and hair-pulling.  I was doomed to send Kathleen to kindergarten with a diaper in her lunch box.
However, Archimedes was correct.  Given the correct lever and one can move anything - even a 2 year-old to want to potty-train.  And after much searching we found Kathleen's - a lollipop.  With a lollipop in her hand and instructions to leave it wrapped until she had performed, a more determined child has not been seen.  One and a half hours later, the lollipop was hers.
Four days and only two accidents later, Kathleen is still going strong and has eaten more lollipops than she has in her entire life up to this point.  If only we all were so easily motivated.
Posted by Sherwood family at 4:59 PM 1 comment: