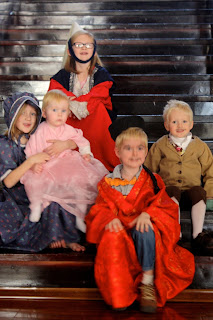 Just in case you haven't noticed, Halloween is this week.  It's very very easy to forget American holidays when you live overseas and hardly ever leave your house.  We been here in Dushanbe for almost a year and I haven't noticed any seasonal decorating at all.  Baku decorated for New Year's, but I haven't seen anything here.  There aren't even any malls where the stray Ded Moroz could lurk.

So it could probably have slipped my notice that Halloween was this week, but it certainly hasn't slipped my children's notice.  That's the problem with teaching them how to read calendars - they read calendars.  "Mom!" Kathleen will announce after staring hard at the computer and counting softly under her breath for twenty minutes, "It's only seventy-six days until Christmas!  That's so close!  I can't wait until it's one day!  Don't you wish it was one day?  What do you want for Christmas??"

They've been counting down to Halloween for at least the last month and everyone has just about reached fever pitch.  Last Monday Joseph was acting up during Family Home Evening so I took him up to bed.  He lay in bed, wailing disconsolately.  Finally I calmed him down enough hear what he was wailing about.  "Don't leave me!!  I don't want to stay home!!  Don't got to the embassy for trick-or-treat without me!!  I want to go to Halloween!!!!"  I reassured him that it wasn't time yet so he rolled over and went to sleep.

This year Kathleen is going to be a medieval lady, Sophia a pioneer, Joseph Robert E. Lee, Edwin a Chinese boy, and Eleanor a pink princess.

And the best thing about these costumes?  I didn't have a single thing to do with them (okay, almost nothing.  I had to pin up Sophia's dress, which is adult-sized).

Somewhere between the children's first Halloween and now I formulated my I Don't Make Costumes policy, which is that I don't make costumes.  I don't consult on costumes, I don't help with costumes, and I never ever ever buy costumes.  When the children ask me what they should be for Halloween I shrug my shoulders and tell them that they're welcome to be whatever they want as long as I don't have to do anything to help.  I'm that mean.

The other day the girls were speculating what it would be like to just request a costume and a few weeks later have it show up ready-made in the back of Dad's car.  After considering the possibilities, Sophia finally admitted that it was actually more fun to make their own costumes.  They spend weeks trying to cobble together anything they can find into a reasonable costume.

This year they presented me with a waistcoat and stock, sewed during quiet time.  After Joseph's nap he was dolled up in a collared shirt, waistcoat, play coat, stock, Edwin's shorts with strings tied below the knee, and Sophia's tights.  The time period was a little off for Robert E. Lee, but I wasn't going to say anything.

Kathleen went through a multitude of outfits before settling on a mishmash of dress-up clothes that vaguely resembles something that might have come from the middle ages, if they middle ages had a lot more beading, sequins, and polyester.  Edwin requested a T-rex, a Stegosaurus, and an Airbus A-380 before settling with a Chinese-ish red brocade robe, also from the dress up box.

Sophia fished out a tutu, pink ballet skirt, and pink dress-up skirt and stuffed a protesting Eleanor into the ensemble.  Next year she'll be big enough to wear Sophia's red princess dress.

A few days ago Kathleen got worried about their homemade costumes.  What if some of their friends laughed at their costumes?  What would they do?  I assured her that their friends, almost all boys, probably wouldn't even notice what they were wearing, and not to worry.  After all, isn't the most important thing about Halloween the candy?  It's a holiday entirely devoid of any deeper meaning so she didn't need to lose sleep over it.

So if you happen to see my kids on Halloween dressed like the dregs of the dress-up bin, be assured that that is exactly what they're dressed up in.  But at the end of the night, I won't have spent a penny and everything can go right back to the place it came from.  And the children will be able to tell stories to their children about their horrible, mean, lazy mother who made them make their own Halloween costumes.  It will be great.
Posted by Sherwood family at 7:30 AM No comments:

It's kind of cold in my house right now.  It's not so cold that everyone is wearing their winter coats inside (although that has happened before), but it's cold enough that I've pulled out my down slippers and jacket.  Which is kind of surprising, considering that just two weeks ago we were sweltering in ninety-plus heat.  Then the falls rains came and everything got cold.

Our house stays pretty cool in the summer, cool enough that I only have keep split packs running in the rooms that I'm actually in.  Its back half is dug into a hill, so the temperature doesn't fluctuate too badly.  This is good for 70+ temperatures, but once the temperature drops below 70, the cooler-inside-than-outside feature isn't such a good thing anymore.  This is generally a feature of masonry built houses, and so when the temperature dropped to fifty degrees, I had Brandon put in a work order to turn on our heat.

Our radiators are run off a couple of American hot water heaters which were put in by the embassy when our house joined the housing pool.  The previous system was a coal-fired stove.  I'm not sure how to do the voodoo that makes the heaters run the radiators and heat our water, so when we want heat we have to ask someone who knows the magic to come and give us heat.

So the Monday after a weekend of cold weather, Brandon put in the work order.  Monday passed and I pulled out all of the down comforters.  Tuesday came and the children decided that fall was really here to stay and reluctantly put on pants, long shirts, and socks.  Wednesday Brandon made a visit to the magic-making men and on Friday they showed up.

Our bathroom toilet seat also needed work - one of the bolts holding it on had snapped - so two of our friendly facilities maintenance men showed up to wave their magic wrenches and make my life better.  I love not having to perform maintenance on our house.  One day this will come back to haunt me when I'm 65 and don't know how to change my own lightbulbs, but for now it's really nice to have professionals fixing my leaks and repairing my dryer.

When they were done, the tall skinny man who speaks English better than the other one, called me down to explain that they had turned on the heat halfway and did I want it on all of the way?  Yes, please turn it on all of the way.  I'm okay with being a little hot if I don't have to wait for someone to come back to my house to finish the job.

"Okay," he shrugged, "we'll leave it on halfway and if it's still cold in a day or two, put in a work order and we'll turn it on the rest of the way."  Then they left.

I shrugged inwardly and went to go inspect my fully functioning toilet seat (did I ever tell you how we spent two weeks with none at all?  In January?).  My friend had kindly slid the one functioning bolt back together but not attended to the broken bolt.

And the next morning our third floor was sixty degrees.  The day after that it was fifty-eight.

Being taken care of by someone else is really, really nice.  When random Tajiks come and ring my doorbell and tell Brandon that we haven't paid the water bill, it's not my problem.  The whole neighborhood can be dark and cold and my generator (which magically always has gas) keeps me warm and light.  If my bookshelves are getting crammed, I can ask and have another one show up at my house and carried right to the place where I need it.  I'm not quite sure that, despite having five children and taking them all over the world, I can quite call myself a full-fledged adult.  Because real adults actually pay rent and have to deal with flooded basements.

But every now and then being taken care of isn't quite as nice.  Because if I don't know how to turn on my heat I can't.  And I spend days in a cold house wondering when it won't be cold anymore.  My toilet seat threatens to slide me onto the floor several times a day because I have no idea where to buy the correct bolt to screw the darn thing on.

One day I'll be able to march down to Home Depot and ask the kind men where I can find the toilet seat bolt and go home to fix it on the same day it broke.  My heat will turn on with the flick of a thermostat, even switching between heat and air conditioning whenever the fancy strikes it.

Then I'll remember the days of pampering with nostalgia and think that I never had things so good.  But I will have a warm house.
Posted by Sherwood family at 6:21 AM No comments:

Labels: Living with the Foreign Service

So it's been some time since all of you have gotten your daily recommended dose of the Sherwood Family Doings.  I'd like to pretend that our life has been crazy busy with fabulously interesting and blog-worthy activities, but it really hasn't that much.  We've all gotten sick.  And then we got sick again.  Then we had friends come and visit from Moscow.  And they all got sick (I'm sensing a theme here).  And in the end I just got lazy.

I toyed with the idea of just quitting altogether; blogging seems to take more and more time these days and on some Sunday evenings the last thing I want to do is sit down and write for a few hours.  I much prefer to be a consumer of writing instead of producing it.  I consider quitting every year or so, but in the end I can never quite go through with it.  I'm very much a creature of habit - I'm on my fifteenth year of running even though I hate every minute of it - and I just can't quit now.  We've had so many adventures over the last eight years and it would be a shame to break a streak that long.

So for now the stories will keep on coming (you're welcome, Mom).  I can't promise anything interesting or exciting.  But I can promise stories.