In the universe, there are many mysteries, unexplained phenomena that puzzle scientists and lead to such multi-billion dollar projects as the Large Hadron Collider or the Hubble telescope. Often the phenomena occur, and no one can explain how.

Although the very large and very small have been explored, cosmos, and microcosmos, no one has turned their attention to another treasure-trove of mysteries: small children. Their specialty lies in teleportation of matter. Where have the car keys gone? Try looking in the bottom of the bathroom cupboard. How about the phone? Try the back of the freezer. And don't even think of leaving really valuable items laying about; they may end up buried in the backyard.

As Brandon and I were talking today, Kathleen was pulling books out of the bookshelf and reading them to herself as consolation for being ignored. In the midst of perusing Love You Forever (the one she always brings over when she's feeling neglected), Kathleen froze and then her face fell, followed by what can only be described as blubbering. One can only imagine the things that she's saying to herself as she cries. "They don't love me, everyone hates me, why does this always happen to me?" When asked to come over and receive comfort, she wouldn't budge, but continued crying with an expression of extreme consternation. Brandon walked over to investigate and discovered a new act of teleportation: a solid mass from
her diaper had magically moved intact from its original location to halfway down her pant leg.
Posted by Sherwood family at 7:20 PM 1 comment:

Why I Have a Child

When I was a child and my mother would inhumanely make us children help about the house, she would reply 'that's why I had so many children - so they can do my work while I sit around reading trashy novels and eating bonbons.' I've decided that there is something to my mother's methodology, so we're starting Kathleen young. 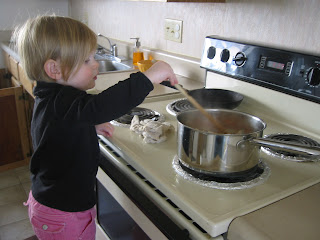 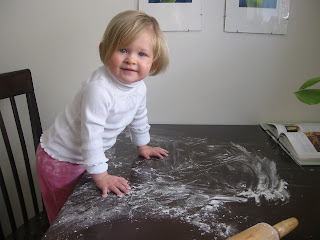 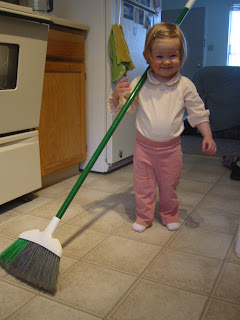 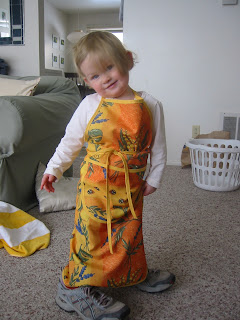 As my father's daughter, I was raised in a household of Gear. My parents' garage ceiling and walls are covered with various tributes to gear-sports: kayaks, windsurfing equipment, numerous bikes, the obligatory power tool collection, and a canoe. Not to mention the gardening equipment, but that belongs to my mother. Enter the kitchen, and her domain is also gear-infested: numerous cooking pots, springform pans, whisks, spatulas, cake pans, cooking torches, and the absolutely necessary microplane grater (no cook can do without one).

Brandon, however, if he was raised in anything close to a household needing Gear, never inherited that propensity. At the commencement of our marriage, I brought a car, a computer, at least five boxes of kitchen equipment, sewing odds and ends, three boxes of painting, stained-glass, drawing, basketweaving, and bookmaking supplies, a chair, a lamp, a small collection of custom-framed artwork, a stereo system, and various other small items. Brandon brought Babe (on video, and we have no VCR), some clothes, and three or four boxes of books.

Being a farsighted person and liking to plan for the future, I have recently begun planning for the arrival of Sophia. As we own a crib, clothes, a carseat, and the diapers can be bought closer to her arrival, that only left one thing: a stroller. When Kathleen made her appearance, Brandon and I had our first discussion about strollers. He balked at the necessity of two strollers (one for running and one for other places), to which I finally appealed to experience by asking how many strollers his mother had. To which he replied, "None, where would she have used a stroller?" I suppose there aren't many sidewalks through cow pastures in Missouri.

So when the purchase of a third stroller was made yesterday, Brandon did what has never been done before in our marriage: he issued an official ban. No more strollers.  Ever. 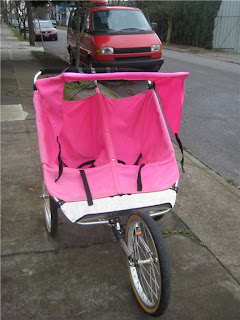