With her sister not being yet 72 hours old, Kathleen has made the first strike in the eternal sibling war. Coming out from the bathroom, I found Sophia curled up on the floor, no longer in her car seat where she was peacefully sleeping. Kathleen looked both guilty and perplexed. Sophia has no idea what she's in for.

After much waiting, Sophia has joined our family. As with most babies, she is squishy, red, floppy, and cute (at least to her parents). She kept Brandon up all night her first night home, but has behaved better the second night. So much sleeplessness to look forward to... 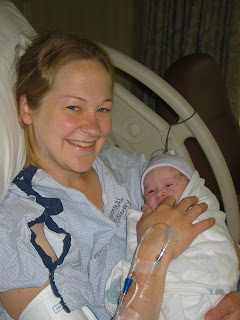 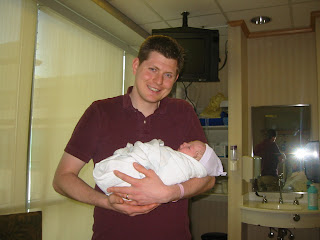 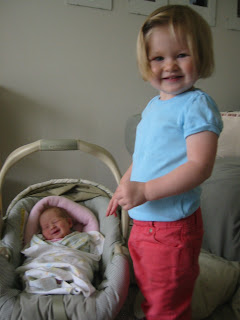 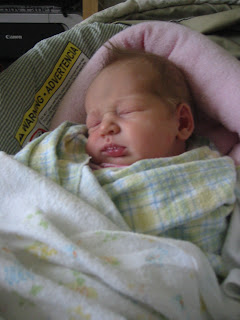 Much of life consists of waiting. We make a decision about something important, get ready and then... wait. I'm sure that someone somewhere has tallied how much time we simply spend waiting at stoplights. Pregnancy is one of those waiting games. A husband and wife decide to add another beloved child to their family, and then everyone waits for nine and a half more months until that child makes its appearance. Like most things, the most excruciating waiting period is right at the end. We can wait 40 weeks, but the last fews days are sheer torture.

When I was pregnant with Kathleen, I was optimistic. Perhaps I could buck my genetic trend and actually have a child without oxytocin, and early, too. Kathleen was induced a week late, with my body just realizing that it might be time to kick her out. It seems that I'm just so hospitable that nobody wants to leave.

This time with Sophia I knew better. My due date was May 14, so I expected to be induced a week late, and was pleasantly surprised to find out that with my history, I could get induced on my due date. Which is today. And we don't own a laptop. And I'm not at the hospital. This time it's not physiology to blame, it's scheduling. Who knew that May 14th would be such a popular date to schedule an induction?

So, here I am, again, still pregnant. And will most likely be until Sunday, when I'm going to kick my ox into the mire and be induced. Perhaps I'll take my friend Natalie's offer and go jump on her trampoline for awhile after dinner.
Posted by Sherwood family at 6:09 PM 4 comments:

When two people marry, the thought of differences is inconceivable; that, after all, is why two people marry - they are absolutely perfect for each other. And perfection implies agreement in everything. Until they marry, then live somewhere, have to pick out furniture, and set up housekeeping. And that's just the beginning; wait until children come along.

Thursday afternoon, in a fit of housecleaning that only seems to occur when a child is about to be born, Brandon, Kathleen and I were in the backyard. I was cleaning the jog stroller, and he was scrubbing out the trashcan, which had grown a fine layer of black mold in the bottom during the winter. My excuse was that it was too cold to clean anything outside, so the mold got to stay.

Kathleen, being a small child, has a fascination with water, and if the water has bubbles in it, so much the better. If a sponge also comes with the deal, life is perfect. She started out somewhat innocuously (compared to later), by scooping out the bubbles to place upon her head. Then came the splashing. But the piece de resistance, grounds for disagreement between Brandon and myself, was when she started drinking the soapy, moldy, trashcan water out of the sponge.

He was revolted. I ran and got the video camera.
Posted by Sherwood family at 12:02 PM 3 comments:

While on our way home from Portland, Brandon, Kathleen and I decided to stop in La Grande, Oregon. None of us had ever been to La Grande, and we heard that there was a nice place for sandwiches, organically shade-grown coffee, and strange college students, called Highway 30. It was a lovely, sunny day, warm but not too warm, and we enjoyed a nice walk around the historic downtown.

During our stop for luncheon, we decided to get the car fixed as long as we were in La Grande. It was making a scraping noise that only stopped when Brandon took a walk along the Interstate and found some spare parts that he was able to (once again) rig up the detached muffler pipe with. The patch from the previous repair job was holding just fine; a section a few inches down was now causing the trouble.

So if any of you are in La Grande, and need a muffler repair while having lunch, we highly recommend The Muffler Shop, on Madison Ave right behind the railroad tracks.
Posted by Sherwood family at 6:10 PM No comments:

Why There are Three Types of Vacations

After being married awhile, Brandon and I started talking about vacations. Vacations, I insisted did not include children. Brandon countered that they did. After some discussions, we came up with three types.

1. Trip. On a trip, one takes family and visits family.
2. Vacation. On a vacation, one takes family, but does not visit family.
3. Getaway. On a getaway, no family is involved other than one and one's spouse.

While planning our trip to Portland, I decided that Brandon and I needed a getaway to celebrate our anniversary. After some arranging the surprise, we went to the coast and stayed at a wonderful bed and breakfast for two nights while Kathleen got abandoned at her Aunt Laura's house. Contrary to typical coastal weather, the sun started shining as we pulled into town and was fairly sunny our entire stay. Not that it mattered much; we simply enjoyed eating entirely too much food, sleeping as long as we wanted, and reading a book together with no interruptions. There were a few walks interspersed between eating and napping.

It is now my definite opinion, now proved, that getaways are the key to parental/marital sanity. 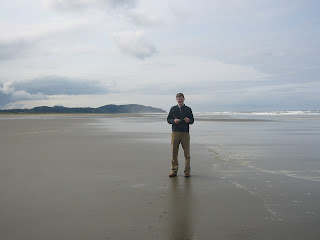 A while ago, Brandon and I decided to take a trip. Kathleen was included in the trip, but had no part in the planning because she's not even two and can't say her own name. Her opinion wasn't consulted. When I told my father (who is an OB/GYN) that we were going to Portland, Oregon (a 12-hour drive away), he asked how far along I would be. 37 weeks, I sheepishly admitted. After that, he didn't want to hear any details.

For those of you who are wondering, Sophia is still safely inside and I had no blood clots, heart problems, or anything else that might be associated with long-distance car travel while terminally pregnant. Just some irritability and a moratorium on twisting around to reach the back seat for the next several months.

As with all trips, expected problems turned out worse and better than we had hoped. And we certainly have learned some lessons to store away in the parental consciousness so we can pass it on to our children who will promptly ignore it.

1. Children sleep less than one would think they should in the car, and inevitably stay up past their bedtime when you most want them to be quiet and go to sleep. Softly played Primary songs don't help. Although this principle was obnoxious enough on the trip to Portland where we arrived around 7, it became even more painfully so on our return trip, where we didn't arrive until 11. Kathleen managed to finally fall asleep right around Salt Lake.

2. When placed in a situation with new toys and new compatriots, children suddenly become aware of nothing else. We stayed for several nights with Brandon's sister, Alissa and her family which included three cousins, the oldest being 4 1/2. Who knew that pushing around a toy walking car could provide hours of amusement to someone who can already walk?

3. On vacation, nutrition goes out the window. We began the week well, with a healthy whole-wheat couscous salad and dried fruit. Mid-week, Kathleen was feasting on Easy-Mac for several meals. By our trip home, her last meal was a hamburger patty (just the patty) and french fries.

4. Tiring out a child will help them sleep anywhere (as long as it isn't the car). For the other portion of our week, Brandon and I stayed with my sister Laura and her husband Ben in their studio apartment on the eight floor of a downtown tower. Despite being in the same room as four talking adults, Kathleen had no problem falling asleep. The only problem was when she woke up around 6 and there was no door to keep out her babblings.

5. Siblings, despite any difficulties growing up, are wonderful to visit. Despite our invasion of their studio, Laura and Ben seemed very happy to see us, happy enough to take Kathleen off our hands for a few days while Brandon and I went to the coast. We had a great time walking around Portland with them, and seeing their new apartment and where Laura works. Seeing Jeff and Alyssa was just as fun, and we got to watch their kids for them and give them a date night. We stayed up entirely too late the night before we left playing Settlers of Catan. Despite improved sibling relations, however, you're never too old to still be upset by games. No one threw any tantrums or pieces to the game, though.
Posted by Sherwood family at 4:02 PM No comments: