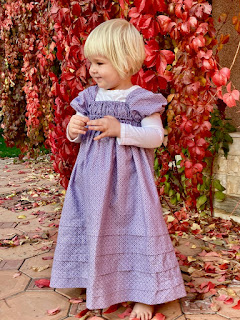 Elizabeth turned two last Sunday.  Brandon spent all Sunday observing the Uzbek presidential election in Bukhara, so we didn't celebrate on Sunday, but instead on Monday.  One of the advantages of being two years old is that you're not quite clear on what exactly birthdays are and when they're supposed to be celebrated.

Sophia has been teaching Elizabeth the happy birthday song, so she was delighted when we lit the two candles on her cake and all sang to her.  She was even more delighted when she received a bag of candy that her siblings has bought for her and a book that her grandmother had sent.  When the evening ended with a piece of cake, her birthday bliss was complete. 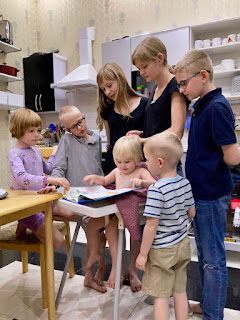 Elizabeth is a very typical two year-old, busily getting into all the trouble she can find.  After Elizabeth repeatedly ransacked Kathleen and Sophia's room while they were doing their schoolwork, the girls have started locking their door whenever they leave their room as Elizabeth can now open doors by herself.

One morning this week, Edwin found Elizabeth in the kitchen.  She had pulled a chair over to the counter, climbed up the chair, and then found a bin full of chocolate chips.  Knowing that someone would find her eventually, she busily stuffed as many chocolate chips into her mouth as quickly as she could.  When she was discovered, her face was smeared with chocolate and Elizabeth looked very pleased with her ability to find tasty treats entirely on her own. 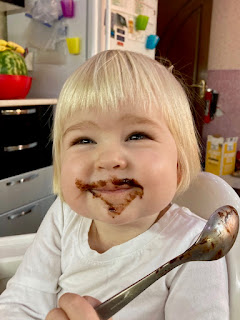 Kathleen and Sophia begged me to buy a bike trailer so that they could take Elizabeth on their afternoon bike rides, and I finally gave in a month ago.  Now one of Elizabeth's happiest things is being tucked into the seat of the trailer, cuddled up with her blanket watching the streets of our neighborhood whizz by as her sisters pull in her style.  Whenever she wakes up from her afternoon nap, she immediately starts demanding, "Bike trailer!  Bike trailer!! BIKE TRAILER!!!" 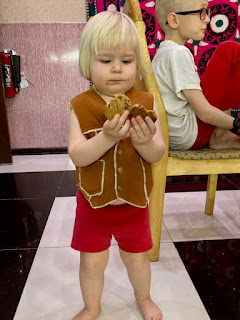 I've always enjoyed two year olds, and Elizabeth is no exception to that.  She definitely has her moments when she's loudly demanding something that she can't have, or desperately wants a thing that I don't understand, or hops on and off and on and off my lap constantly while I'm trying to teach school lessons.  But she is usually adorable cute, cheerfully happy, and oh so sweet to cuddle in my lap.

I'll freely admit that part of my enjoyment in her is because she's the last one.  Whenever I have to clean up another mess she's made, I know that those messes won't last that much longer.  Her irritating screams and cries aren't that bad because they won't be followed by someone else doing that.  And every new milestone she reaches is the last time I get to watch one of my own children reach do that new thing.  I now understand why the babies in families get special treatment from everyone. 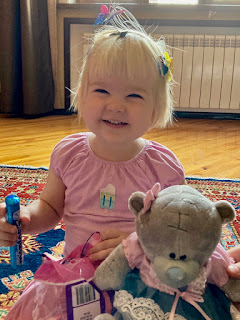 We are all happy to have Elizabeth in our family.  Happy Birthday, Elizabeth!

Posted by Sherwood family at 11:33 AM No comments: 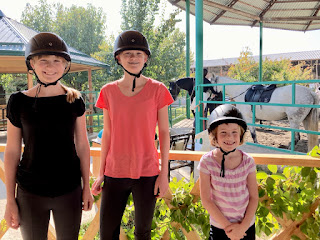 Recently Brandon and I decided to start having boy's day/girls' day.  Brandon wanted to start doing Boy Things with the boys, so we decided to spend one Saturday a month doing splitting up so that each of us could enjoy doing things that maybe wouldn't appeal to the entire family. 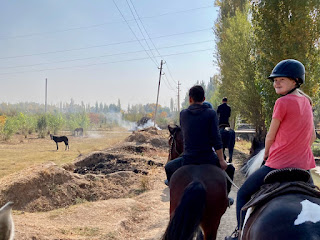 For our first Saturday, held in September, the girls stayed home and did some online shopping for horse show clothes, watched videos of how to do nail art, and then practiced on each other.  The boys went out into the mountains and scouted out camping and fishing locations.  It was a lot of fun, if only because I had four children to talk with instead of seven.  Three fewer makes a difference, especially when all three of them are boys. 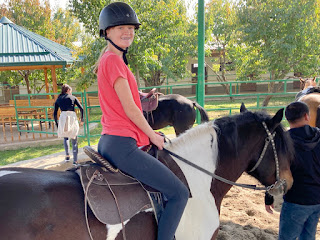 This month, the girls got to go out while the boys stayed home and watched Elizabeth.  I had found a couple of stables outside Tashkent that had trail riding out in the surrounding fields, so we decided to go and try one, Конный Дворик, out.  Even though we ride twice a week in town, it's always in a ring, so we thought it would be fun to get out and see some pretty scenery while having a chance to do some fast riding. 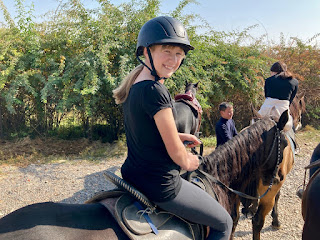 We were able to find the place pretty easily, and the the setup was quite scenic, with a nice courtyard with a rose garden and pleasant seating to have lunch afterwards.  The horses looked well cared for and happy, and after a few minutes of meeting the horses, we headed out. 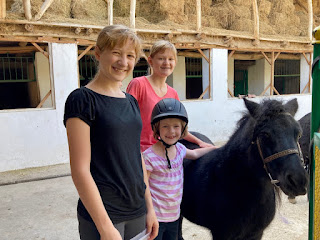 Fall is settling in here, so the trees lining the field were turning lovely colors, and the weather was clear and sunny - a perfect fall day.  I always love getting out of Tashkent, so it was pleasant to be out in the fields.  The girls enjoyed clopping along and even got to get an invigorating canter in halfway through the ride.  Too quickly, the ride was over and we headed back to the stable. 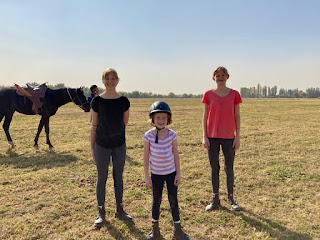 While petting an amazingly fuzzy pony, we started chatting with an English speaking guide.  He introduced us to the owner and they invited us to come and watch them do some archery on horseback.  We all eagerly agreed, and were treated to a fun show of Central Asian mounted archery.  After they were done, our friend let everyone take a turn shooting, but not from horseback. 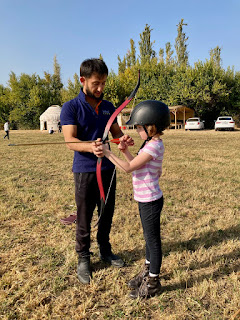 We finished our afternoon with freshly-grilled shashlik, or shish-kebabs.  The stable dogs happily joined us for lunch as we watched a two year-old Fresian stallion being trained by another new friend we had made earlier that morning.  The girls all agreed that it had been a perfect afternoon, and I had to agree.  We're already looking forward to our next visit. 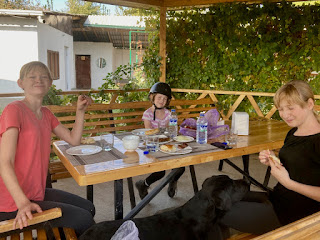 Posted by Sherwood family at 10:49 AM No comments: 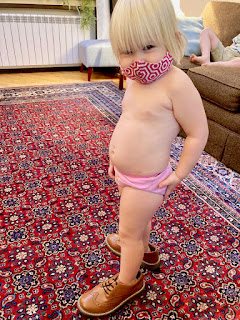 Brandon is, sadly, back to working full-time at the embassy.  He has been since the spring, but we're still in mourning that he has to go to work and leave us all day every day.  Occasionally, however, he will still work from home if can swing it.

Last Thursday he participated on a conference on religious freedom in Uzbekistan.  Before covid times, these conferences were held in person, but now everyone has discovered the joy of virtual conferences and attendees can enjoy attending from the comfort of their home or office.  It saves travel time, and the organizers don't have to worry about providing snacks and drinks for breaks.

Before I went downstairs to do school with the children, Brandon let me know when his slot for speaking would be.  He had spent a reasonable amount of time working on a speech that he was giving on behalf of the U.S. government and he didn't really want it to be punctuated by screams, shrieks, cries, pounding, slamming, or any other other random noises that happen on a regular basis at our house.  It's pretty impressive how well microphones can pick up the exact noises that you'd rather not have shared with everyone.

As the time approached, I let all of the children know that Dad would be giving a speech, and everyone should be very careful to keep quiet.  William started shrieking just before the appointed time, but I was able to chase him down and force silence on him just in time.  We all tiptoed carefully around the house, speaking in whispers and most especially staying out of the upstairs where Brandon was working.  As I helped Eleanor work on her grammar lesson, I heard Brandon speaking loudly and clearly and felt like a Good Wife for keeping everyone quiet for this important moment.

Soon enough, Brandon grew quiet and we returned back to our normal school noisiness.  A little while later, I checked in with Brandon to see how the speech had gone.

"It went well," he told me, "but right before I had to speak, I heard Elizabeth coming up the stairs, babbling to herself.  Right as she came up to me, the moderator announced that I would be speaking, and I had to turn on my camera.  I couldn't do anything about her being there.  Everyone was waiting for me and I couldn't suddenly rush off camera so that I could carry Elizabeth downstairs and give her to someone.  I just had to start my speech.  There wasn't anything I could do.

If she had come up five minutes earlier, I could have taken her downstairs to you.  If she had come ten minutes later, I would have been done.  But instead she had come at the exact wrong moment in my entire workday.  I had visions of that BBC guy with the little kid in the background flashing through my head and I couldn't believe that the exact same thing was happening to me.

Luckily, she came from the side and she's short so everything happened where the nobody could see what was going on.  So I clapped my hand on her head to keep her from trying to climb on my lap and just started my speech.  I was afraid that she was going to cry or complain about being kept still, but I think she was just surprised at my my reaction and also how loudly I was talking.  She might have been able to tell that something important was going on and kept quiet, but I'm just grateful nobody but me could tell that she was there the entire time.  Maybe she just knew I needed a live audience."

As I listened to him, I couldn't decide whether to die of mortification or die laughing.  I had been so careful about making sure everyone kept very quiet, but didn't even think to wonder where Elizabeth was during that all-important ten minutes.  I literally had one job to do, and only had to do it for ten minutes, and I wasn't able to get it done properly.

But when I thought of Elizabeth standing next to Brandon, held immobile by his hand firmly held on her little blonde head, I couldn't help but laugh.  What a perfect encapsulation of life as a father of seven children - giving a speech to numerous government officials and members of various organizations while desperately trying to keep your almost two year old daughter from making an unannounced appearance in the meeting.

In the end, everything turned out okay, and nobody was the wiser except the three of us.  And now the entire internet.  But I know that the next time Brandon has to give a speech while we're all at home, I'll be very sure to make sure that Elizabeth is kept as far as physically possible from Brandon.

Posted by Sherwood family at 12:30 PM No comments: