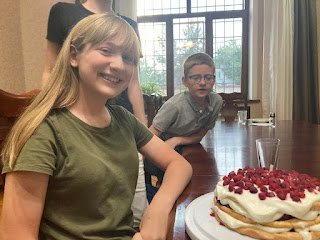 Sophia's birthday was also back in May, but we didn't celebrate it in May either.  She wanted to wait and celebrate it with her grandparents.  So when Brandon had to be in Bukhara for a work conference on Sophia's birthday, it was okay because she'd already decided to delay her birthday.  Ironically, we celebrated it on Brandon's birthday, so this coming week will be his birthday, observed.

But despite my insistence that her actual birthday was just a regular day without any special celebrations,  when friends showed up we decided to make an evening of dinner and swimming together as both husbands were out of town and couldn't say no.  Sophia's friend had baked banana bread for her birthday, so we ended up singing to her anyway and she did indeed have two birthdays.  I guess that's what she gets for being a reasonable child about moving her birthday around. 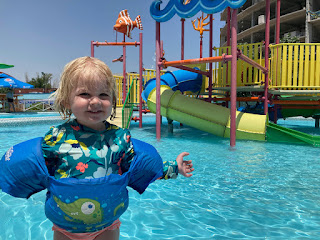 On her birthday, observed, she got to have all the food preferences she wanted - coffee cake for breakfast, eggs benedict for dinner, and raspberry baccone for her cake.  For her fun activity, we went to a local water park where she repeatedly badgered the lifeguards into letting her ride the 'adult' waterslides.  The weather was better for water parks in June than in May, so she probably came out ahead in that respect. 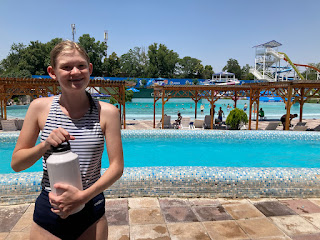 I can hardly believe that Sophia is already fourteen.  When Kathleen hits the big milestones, I seen them coming from a long way off.  But then Sophia sneaks up behind her and hits them less than two years later and I'm surprised every time it happens.  She will be in high school in the fall, and then I will have two children in high school, which really spells the end of my run as a mother of young children. 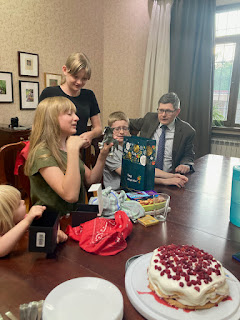 I'm not concerned at all with her ability to handle high school and the harder classes that she'll be starting in a few months.  She has, through a lot of hard work, learned to be quite diligent in all her school assignments, and I never have to worry about bothering her to get anything done.  It's always a relief to me to know that there's one child I can count on to be dependable and reliant even if everyone else is falling apart.  I probably lean on her for help more than I should because she is not only capable but also willing to help out, especially with Elizabeth.  Elizabeth will sometimes call me "Sophia" because Sophia spends so much time with her and really loves it (mostly).  On Sunday mornings Elizabeth will come down dressed in a pretty church dress, complete with hairstyles and jewelry because Sophia wanted to dress her up.

Everyone is happy to have Sophia in the family, and it showed when all of her siblings that have money bought her a present for her birthday.  I look forward to continue watching her grow and become even more amazing.  Happy birthday, Sophia!

Posted by Sherwood family at 2:07 AM No comments: 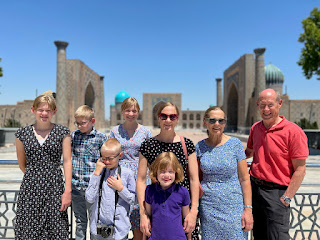 Every year we've been in the Foreign Service (all thirteen of them), we've been able to go back to the US for a visit.  It hasn't always been at the same time, but we always make it a priority.  It's a lot of hassle and can be pretty exhausting, but we want the children to know their extended family, and I know that their grandparents want to see them.  This year is the first year that we haven't been able to to go back, and we're hoping that it was the last year.
When my parents heard that we wouldn't be able to make it back, my mom cheerfully announced that they'd just come visit us instead.  My dad has been retired for almost eleven years and after spending five years serving missions for the Church, they've been enjoying their retirement and have spent a lot of time traveling.  So they were able to slip in a visit to us between a trip to Cape Hatteras for kite surfing and a trip to Seattle to go see my brother. 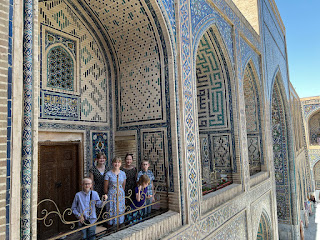 The kids were, of course, ecstatic that their grandparents were coming to visit, and eagerly counted down the days until my parents showed up to come and play with them.  My parents had already seen all the Silk Road cities during their last visit, so we decided to keep things low-key and hang around Tashkent for most of the time.
This turned out to be a good decision, as their bags got stuck in Boston and my parents spent three days borrowing clothes and washing their own every evening while waiting for the baggage to arrive.  It was a complicated process to figure out how to file a report for lost baggage - I made 37 different phone calls before I actually reached a person, and thankfully that person could tell me where to go to file the report - and complicated process to get the bags from the airport.  I was very thankful for all the years of studying Russian that made it possible to understand what everyone was saying to me and give them a coherent answer.  I can't imagine how tourists with lost baggage get it back. 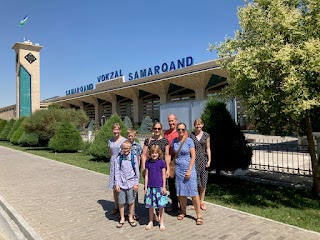 Most of our days were spent in the pool for at least part of the day.  After an unusually cool and rainy May, summer arrived the day my parents did, with the temperatures getting up to 100.  The kids had a great time swimming with their grandparents and making silly underwater videos and having my dad throw them into the pool.  I'm grateful for parents that are both able AND willing to come all the way here to swim in the pool with my kids.
In between swimming, napping, and hanging out, we did take a day trip to Samarkand.  Some children wanted to see it again now that they have a greater appreciation of history, and others just wanted to ride the speed train that took us there.  Elizabeth and William - who are the only ones in the family who haven't been to Samarkand - got left at home with the housekeeper.  Nobody wants to haul small children around in ninety-five degree heat to go see tile-covered monuments.
In addition to going to Samarkand, we also rode the Tashkent metro and went up the TV tower - both firsts for everyone.  Neither was the highlight of anyone's visit, but now we've done them and nobody can complain that we spent four years in Tashkent without going on the metro.  I found it to be nicer than the metro in Baku, which is the only other former Soviet metro I've been in. 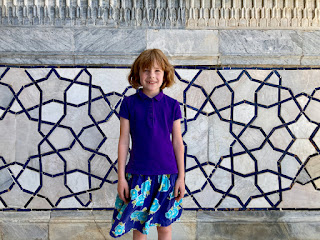 We finished up our visit with a quintessential Central Asian attraction - a local water park.  My parents got to experience the random reinforcement of non-logical waterslide rules and then watch as my children pushed, cajoled, begged, and badgered their way onto the waterslides that were for adults only.  They also got to experience burning the bottoms of their feet on hot pavement, icy cold pool water (how is that even possible when it's a hundred degrees???) and crowds of Uzbeks also trying to beat the heat at the pool.  But the highlight of the afternoon was when waterslide lifeguard stopped Kathleen from going on the adult waterslide and then asked her out in Russian.  She didn't realize what was going on until halfway through and let him know that no, she wouldn't be meeting him later to go for an evening walk.  But then he let her go on the slide, so it was a win in the end.
After spending a week with their grandchildren and eating lots of cherries, apricots and fresh naan bread, my parents left to go back to their real life.  Even as they were saying their last goodbyes at the airport, they kept claiming that it was completely worth it to fly twenty-four hours each way, not have new clothes for three days straight, and just get over jetlag before returning and having get over it all over again.  I've got to admit that I've got pretty amazing parents.  Everyone was sad at the parting, knowing that they'd have to wait a whole year before seeing each other again.  But we're grateful that it's only one year and not two.
Posted by Sherwood family at 2:01 AM No comments: 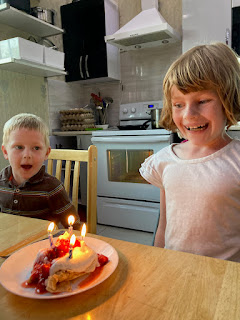 Eleanor had her birthday back in May, more than a month ago.  She had a pretty good birthday and got to go out to dinner to the local amusement park for her birthday Saturday.  It's hard to believe that my fifth child, the oldest of my babies, is now eight years old.  We let the children use breakable glass and ceramic tableware when they turn eight, and it's so strange to see only two plastic settings left when the table is set for meals.  Children have a tendency to grow up when you're not paying attention and it's very surprising when that happens. 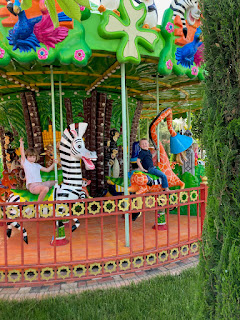 My parents decided to come and visit us in June, so we decided to hold Eleanor's baptism during their visit so that her grandparents could be part of it.  They don't have that many grandchildren left to be baptized, so we thought that they'd enjoy being here for Eleanor's baptism.

When Kathleen turned eight, I sewed a white dress for her baptism.  It's also been used by her female cousins, so my parents brought the dress and a pair of white pants for Brandon with them in their luggage when they came out to visit.

We had planned to hold the baptism for the day they arrived, on a Saturday, but their luggage didn't show up when my parents did.  The baptism had to be postponed until the clothes arrived, but thankfully it was was pretty easy to postpone as it was going to happen at our house and only one other family was coming.  We started looking for other clothing options, but were happy that the suitcases showed up Monday morning so we could hold the baptism that evening.

The baptism was, of course, beautiful, and Eleanor was happy to have her friends and family there to celebrate with her.  Everyone in the family except William and Elizabeth got to participate, with Kathleen and Sophia helping with the music, Edwin and Joseph acting as witnesses, my mother speaking, and my dad helping with the confirmation.  I loved seeing the wide smile and happiness shining from Eleanor's eyes as she was confirmed after her baptism. 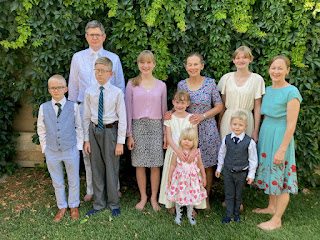 I love seeing Eleanor grow up into a cheerful, thoughtful, sweet girl.  She is always happy to share with everyone, even if it's just a crumb of the cookie that she has.  Her infectious laugh always makes me smile, especially when she's being tickled.  I love seeing the latest horse drawing that she has created and finding the numerous pictures she leaves littered around the house.  Poor Eleanor is stuck between two brothers, but she is a needed break from her sometimes intense brothers.  I look forward to enjoying seeing her grow up further and seeing what amazing things she has in store for us.  Happy birthday, Eleanor!

Posted by Sherwood family at 1:47 AM No comments: