The Persistence of Children

Once, (seemingly) long ago, I was told by a well-meaning former pre-school teacher that children have short attention spans. Your nursery lessons should be short, she counseled me, counting on a minute for each year in the child's age. According to her formula, the longest lessons we should plan for would be three minutes. Never having had children, I decided to ignore her advice and do what I wanted.

Now having had a child for over a year and a half, I wonder whose children she was speaking of having short attention spans. Theoretically, if a child had a short attention span, they would be endlessly entertained, moving from activity to activity to activity and then back again because by the time they got done emptying out all of the cupboards and drawers in the house, they would have forgotten about having done it once, and then do it all over again.

I say theoretically because I have yet to see Kathleen exhibit this behavior. Instead of wandering off after 90 seconds of Bill and Pete, or worse yet, Mother Goose, she sticks around for the whole story and would have me read it to her until, well, I don't know. I've never seen how long; her patience is longer than mine. And Mother Goose is over 100 pages long. I know; I've read the whole thing to her more than once.

With the advent of warmer weather, Kathleen has discovered The Park. And more importantly, she has learned that The Park contains every child's favorite mindless contraption: The Swings. One afternoon, I decided to see who would give up first, her or me. She finally gave up after an hour. But that was just the swings. I had to drag her kicking and screaming home, otherwise she would have stayed for at least another two hours. If I had known, I would have brought a book.

Her most recent obsession that is more easily reached than the park is The Blanket, or alternately The Laundry Bag. Unfortunately her Uncle Nick introduced her to the idea of being swung back and forth inside a blanket. It sounds simple, it even sounds like fun for all involved, but it soon grows old after 10 or 15 minutes for those that have to do the swinging. But don't worry, she'll accept substitutes - Brandon has been obliged to carry her around the house inside a blanket or one of our laundry bags for an entire afternoon. And if her favorite activity is interrupted, she howls like she's just been told she's going to be sold into slavery. This morning, while getting ready for church, I finally put the blanket out of her reach because she was following us around the house with it, asking to be swung (not with words, just with an insistent uh-uh-uh-uh-uh-uh). She just went and found another one. Whoever says children have short attention spans clearly has never done anything with them that they enjoy. 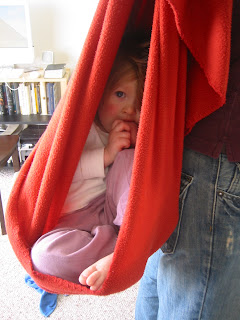 Has Anyone Seen Spring? 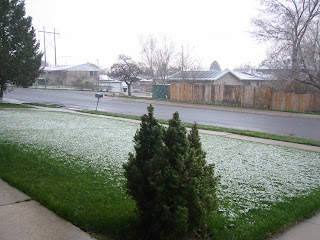 This was the view out of our front window Thursday morning. I wasn't very happy. And neither was Kathleen. 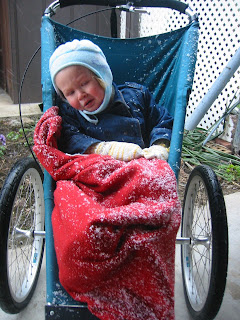 As a fairly new parent, I am still coming up against every parent's daily struggle of ideals versus reality. The first source of ideals comes from parenting books and magazines. There are enough ideals stuffed into such sources to make any mother feel as if their child will grow up to be a mass murderer because they weren't read to in utero and had at least 3 hours of concentrated play-time and parental interaction. Thankfully, I learned to ignore those sources early on; I had enough guilt without needing a well-designed layout to increase it.

However, the second source of ideals is harder to ignore: the ones we create ourselves. Those ideals we hold because we think that they are an intrinsically good idea or principle, not just because a slick magazine layout told us they were so.

The first ideal that got discarded was 'I'll never yell at my darling child;' it lasted about 3 weeks until Kathleen wouldn't stop crying in the middle of the night and all I wanted was sleep. Somehow children should know to stop crying when you yell instead of simply crying more. And ever since, they've been dropping by the wayside.

Ideal: My child will always eat healthy food and no desserts. Reality: Macaroni and cheese is perfectly nutritious, and cheerios are a great distraction
Ideal: My child will never eat treats in church. Reality: At the height of snack-dom we had three different types of treats (cheese, cheerios and cocoa crunchies).
Ideal: I will enrich my child's mind with daily activities and reading. Reality: Daily activities definitely include sitting on my lap while I surf the internet. And Noisy Nora can certainly enrich any child's mind.

With the coming of Kathleen's 18-month birthday, another ideal bit the dust. Despite being perfectly happy with her first week of nursery, Kathleen was not nearly as happy with her second and third weeks. I have never heard a child scream the way she did while being left in nursery. So, despite my resolution never to sit with my child in nursery, that's exactly what Brandon and and I have been doing for the last three weeks in church. On his week, Brandon got to enjoy a full two hours of play time, snack, lesson, and coloring. We'll have her trained just in time for Sophia to arrive and start disrupting the peace again.
Posted by Sherwood family at 10:21 PM 4 comments: