This year Christmas was cut a little short.  Brandon is still bitter about that, as Christmas is his favorite season of the year (did you know that there are actually five?).  Usually Christmas starts the Saturday after Thanksgiving when we spend the day decorating the house, listening to Christmas music, and finishing the evening watching White Christmas while drinking peppermint hot chocolate.

However, this year we were an ocean and several continents away from our house and decorations, so it didn't happen the Saturday after Thanksgiving.  Instead we decorated the house the next Saturday, less than thirty-six hours after we stumbled off a plane in Tashkent.  It was less cheerful than our usual tree decorating (and with vomit), but it did get done.

We did manage to get in most of our traditional Christmas activities in three weeks instead of our usual four, even if it never quite felt as fully Christmas-y as it does in other, less jetlag- and newborn-filled years.

A week after decorating the house for Christmas, we had our fifth caroling party.  When I suggested skipping the party this year - jet lag and a newborn are a good excuse - Brandon insisted that we couldn't break tradition and the party would be happening.  And in comparison to traveling almost halfway across the world with seven children six weeks after popping a baby out, hosting a caroling party really wasn't that difficult.

In addition to caroling, we also made snowflakes, watched Christmas movies, decorated a gingerbread house, made wrapping paper, and had friends over for Christmas Eve.  I love having traditions, and Christmas traditions are really fun ones.

Christmas itself was wonderful.  Elizabeth let us sleep in until 7:30, so that was her present to us.  We had our usual croissant cinnamon rolls, opened stockings and presents, listened to Christmas music, read books, watched a movie, and enjoyed spending the day together.

We don't buy many presents for the children (instead of dollar signs I see pounds whenever we buy more things), so the day was less about stuff and more about spending time together.  As we watched the children and their friends perform the Nativity on Christmas Eve, I thought about how the birth of that baby made - and makes - days together as a family possible.  Because of His birth, I know that we all will live again and be together after we pass from this life.  But also His birth enabled us to know what things are most important and how to hold those things close.

I've had difficulty reconciling the more secular aspects of Christmas with the sacred ones.  But over the years, I've come to think that perhaps Christ would want us to have the pleasure of friends and family and fun times together in celebration of his birth.  That all of the trappings - snowflakes, gingerbread houses, presents, silly songs - bring us happiness in simple little ways.  Instead of feeling guilty for doing things that aren't directly worshipping our Savior, I'm grateful that he came to earth so that we could enjoy these secular things along with the sacred.  I'm grateful for the family to enjoy them with, and all of the other blessings - health, peace, prosperity - that make the smaller things possible.

This coming week we'll put all the Christmas things away and life will return to its usual routine.  January is always a bit of a sad, bleak month to me.  Christmas has gone and spring is very far away, with winter just getting settled in.  But there will always be next Christmas and all of the good things and times in between.
Posted by Sherwood family at 11:17 AM No comments:

So We Had a Baby

I have had a blog post about Elizabeth waiting to be published for the last six weeks, but it's been so busy I never got around to actually posting it.  Since the post is now - according State Department terms - OBE (overtaken by events), I'll sum it up.  Elizabeth was born.  Everything went well.

I was scheduled for my usual induction, but when I went in for a check-up the afternoon before, Elizabeth's heart rate was a little worrisome.  Not wanting to leave things to chance, the doctor decided to go ahead and send me straight over to the hospital and keep her monitored there. 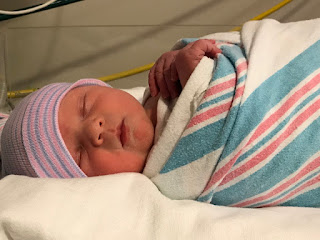 When I got there (after getting my parents to pick up the children and picking up Brandon myself), everything appeared to be fine and so the induction was started that evening.  The labor progressed pretty rapidly and Elizabeth showed up at 2:08 AM after over an hour of pushing.  Both of us were healthy, so we got to enjoy a few days in the hospital before being sent home to fend for ourselves. 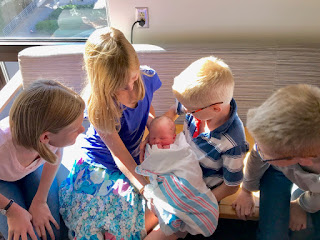 The next six weeks went by quickly as Brandon and I made our way through the paperwork checklist.  I picked up the birth certificate a week after Elizabeth was born, and we headed up to DC the next Monday to apply for her passport.  It was done the next day and had her Uzbek visa in it the next week.  Elizabeth wins the family record for the earliest passport, with hers being completed by her twelfth day. 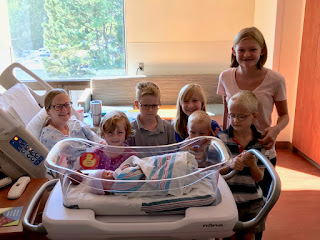 After the passport and visa, Elizabeth and I both got medically cleared, Elizabeth got added to Brandon's orders, and we had her plane ticket a full week before we were planning on traveling back to Uzbekistan.  Brandon and I kept looking at each other the entire time, wondering when the unexpected disaster would strike.  But no disaster struck, and we all flew back to Tashkent together on December fifth, arriving the night of the sixth with all our luggage.  The carseat that we forgot to pick up at the baggage carousel in Frankfurt even showed up. 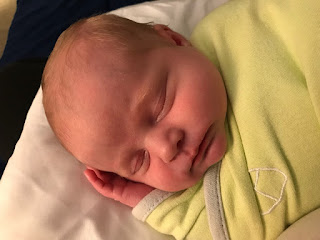 Before heading back, we were able to fit in Joseph's baptism and Eleanor's baby blessing the weekend before Thanksgiving.  Brandon's parents and sister Brooke made the trek out from Missouri, my sister and her family came up from Jacksonville, my aunts came down from DC, and my brother and his family came down from Delaware.  It was a wonderful family weekend.  As I watched all of the priesthood holders gather round to bless Eleanor and confirm Joseph, I was thankful for the wonderful men in my family who do such a wonderful job of serving God and taking care of their families.

The next weekend my brother and his family and my sister and her family gathered for Thanksgiving at my parents' house.  It was a boisterous and rowdy weekend, with lots of delicious food.  All dozen of my parents' grandchildren were gathered, ranging from one month to thirteen years old.  Weekends like that remind me of all that I miss while living overseas. 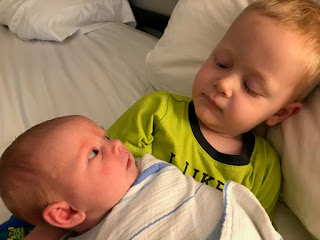 Our three months in North Carolina were actually quite enjoyable, and in the end I'm glad that we didn't go to London.  I enjoyed the time we had with family and friends - and also being able to drive everywhere and have a house with a yard instead of a tiny London flat.  I had such a great time that I was afraid that going home would be a disappointment after all the fun we'd been having.

But as soon as we walked in the door, I was so glad to be home, even if home is currently in Central Asia.  It's great to be settling back into our routine and enjoying Christmas in our own home surrounded by our 'family' here in Tashkent.  And most of all, I'm grateful that we're all together as a family.  All nine of us.
Posted by Sherwood family at 11:26 AM 1 comment: