As most people are aware, timing is a very important key to life. When working out the timing of delivering a baby and going to the hospital, everyone is generally happier with the latter occurring before the former. Those who sold their stocks before a certain day in 1929 were much happier than those who sold them after that date. And parents are generally happier when marriage comes before a baby in the baby carriage.

This week, Brandon and I learned what happens when timing doesn't go your way. The Sunday we departed from Missouri, we arose to discover Brandon's brother sleeping in the family room, unhappily nursing an unfortunate mixing bowl. Everyone stayed very clear of the family room, went to church, and then hightailed out of Missouri, thanking our stars that the blow had fallen before we could also become infected.

However, we thanked too soon. Fate caught up with my stomach two hours outside of Omaha, our stop for the night, and our happy reunion with Brandon's older brother, pregnant wife, and four children, was happy for everyone but me. This time I was the pariah, as no pregnant mother of four needs even more chaos introduced into her life.

So after not nearly enough sleep, we woke early and got our infectious selves out of town as Brandon was showing symptoms of the mysterious illness, compounded with sleep deprivation. Sophia joined company with malodorous presents in her diapers in Wyoming, and everyone was ready to throw everyone else out of the car by Little America. As my pediatrician commented the next day when hearing of our drive, 'Wyoming is one endless desert.'

Fifteen and a half hours after leaving Omaha, we limped into Springville (listening to our new CD player which was installed after the old one died eight tracks into Dune), and went to bed. After having both gone through childbirth and driven twenty-one hours in a car with my children, sick, I have decided that I would have rather spent that time giving birth (with an epidural, of course). If I fall asleep during childbirth, no cars are driven off I-80, killing everyone inside.
Posted by Sherwood family at 9:20 PM 1 comment:

You Think We Would Have Learned

We leave on Saturday for Missouri, where Brandon's parents live. Our last road trip was a paltry 12 hours, completely do-able in one day. This time, we're looking at a 2-day 20-hour trip two-thirds of the way across the country. My parents (in North Carolina) actually live closer to Missouri than we do out in Utah. However, with the cost of plane tickets currently we can get Brandon out there by plane for what it costs to get all four of us there by car.

Last year, Kathleen wasn't quite a year when we made The Trek, and she behaved herself quite nicely, sleeping a lot, and staying quiet for most of the right. We have no such hopes this year, as Kathleen is much more vocal, and much more easily bored. What do you do with a 2-year old who doesn't care about movies? I have no desire to read Bill and Pete for 20 hours.

And now Sophia (who is currently screaming herself to sleep) gets to join the mix. Last year we swore that it was the last time we would drive from Utah to Missouri, but we're still here, and still driving. Maybe next year. In Jerusalem.
Posted by Sherwood family at 9:05 PM 7 comments:

As a child, I would often become frustrated with my younger siblings' blatant lies. 'But that's not true!' I would protest to my mother when my younger brother would tell some far-fetched story about his pet tiger who ate all of his classmates at church. My mother would patiently remind me that small children often can't tell the difference between reality and make-believe so their stories aren't lying, they're just confusions of reality.

Kathleen is beginning to experience the same sort of confusions. However, as she can't talk and so can't tell stories, she acts out her confusion on inanimate objects.

Several days ago as I was reading on the couch, Kathleen came in from playing outside and dropped something wet on my lap. I looked up to discover her toy pig, dripping and muddy from having rooted around in the dirt outside. I'm not sure where she picked up that pigs root in the mud; I certainly didn't tell her.

A few days following the pig incident, Kathleen brought me the baby carrier so I could put it on her. I told her that if she went and got her baby doll, she could carry it around in the carrier. So Kathleen calmly walked into the kitchen, climbed up onto a chair next to the sink, and drew her wet, dripping baby from the bath it had been having.

As part of her (sporadic) toilet training, Kathleen likes to spend time sitting on the toilet, eating raisins, and reading the Reader's Digest. One of her favorite pictures is two women on the back cover. It frustrates her to no end, however, when neither of the women will eat the raisins she so generously attempts to share with them. I try to explain to her that the women are just pictures and raisins won't go into their mouths, but Kathleen just gives me a look that clearly says 'You have no idea what you're talking about.' She's starting young.
Posted by Sherwood family at 9:14 PM 3 comments:

Last Sunday Sophia reached the crucial marker: six weeks. My mother and aunt both refer to the first six weeks as the Dark Ages. Nobody (including oneself) knows whats going on, there's lots of crying, and life is a bit of a mess.

Starting at six weeks, the child starts calming down, sleeping better, and smiling. My mother theorizes that children start smiling at six weeks because otherwise their mother is ready to throw them out. The smile is a life-preserving mechanism.

Sophia has also shown another life-preserving mechanism at the six week marker: thumb sucking. I know parents who pull the thumb out every time their child finds it, or put Tobasco sauce on the offending digit - whatever it takes to preserve future teeth and prevent addictive habits. But future orthodontic care notwithstanding, thumb sucking is a milestone I celebrate. My child can now soothe themself back to sleep. And they're so darn cute when they do it, too.

Which brings us to the best six-week present I could ever receive: uninterrupted sleep. Sunday night Sophia went to sleep at 9 and didn't wake up until 6. This morning it wasn't until 6:30. And that is something that is worth every penny spent on orthodontic care. As my mother says, long term psychiatric care is much more expensive. 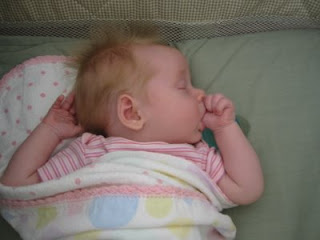