I love mobile children.  Brandon disagrees with me - he'd rather they never move and instead stay in once place until they're twenty and somewhat responsible enough to not break things and scatter the contents of every available drawer across the entire house.

He, however, is usually not the one hauling the children up and down three stories' worth of stairs when the doorbell rings. 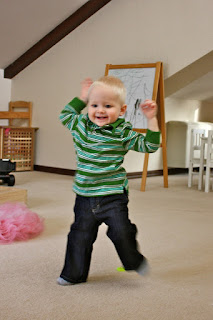 Crawling is always a godsend because it comes at a time when children can't stand being stuck in the same place for more than five minutes and cry and cry and cry until you bring them a new toy or move them somewhere more interesting.  The same is true with walking - by the time they are ready to walk they are fed up with being left in the dust by every other bipedal being in the house and scream and protest when they're left alone by everyone. 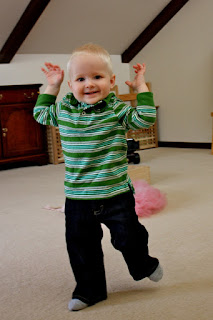 Kathleen walked the earliest of all my children, just past her first birthday.  Sophia decided that the longer she waited the bigger her comfortable seat on baby Edwin would grow and didn't decide that bipedalism was the way to go until she was sixteen months old - and I was six months pregnant with Edwin.  Edwin took his first few steps around thirteen months - but then we were evacuated and waited two more months to finish the job.  So Joseph is pushing the trend back the way I like it at fourteen months. 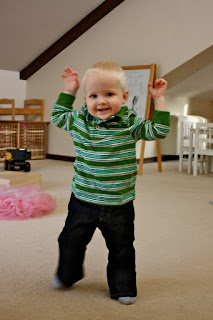 When Edwin learned to crawl he did so by pushing up and then dropping one knee to get some traction.  And then forever after he crawled with only one knee on the ground, his own strange take on the idea.  Joseph has decided that the best way to walk is with both hands held up in the air, and never walks any other way.  While at the park a few days ago, he briefly experimented with putting them down, but decided that up was the better way to go. 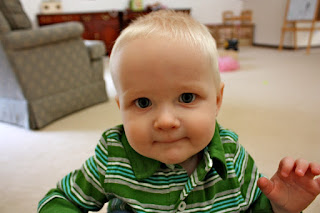 Posted by Sherwood family at 7:00 AM

Very cute! We can't wait to see the four bipedal children in person!!

I love the arms up approach to walking - GO JOSHEPH!

I love his arms up. He is so cute!

The joy of walking seems to be hard-wired in to human brains, and is quite apparent on the face of that one.