Living on the Wild Side

I once had a good friend tell me, "In every marriage, one person is the gas and the other is the brake."  I'll give you two guesses about who is who in my marriage - and the first guess doesn't count.  I'm a gambler by nature and so Brandon is constantly having to talk me down from my newest crazy plan that depends on everything working out just right.

"C'mon," I'll plead, "it's not that likely that I'll fall off the rocky ledge!  And it has such a nice view!  Please, please just let me climb up there?"  Brandon will reply with something about possibilities versus probabilities.  In his worldview, if something dangerous is possible, it's also absolutely probable.  He's most likely the one that has kept all of us still alive through the years.

In addition to being a risk-taker on high rocky ledges, I'm also a risk-taker about food.  I haven't died from food poisoning yet, so I've got thirty-two years of the odds being in my favor - and that means that the local shawerma stand is definitely a feasible dinner option when I'm not in the mood for cooking.  Add risk-taking to being cheap and the local shawerma stand guy may or may not already know Brandon and me by sight.

When we moved to Dushanbe I started out drinking reliably safe milk - UHT.  It may be nasty, but its nastiness is directly the result of being boiled so long that nothing would even think of living in such inhospitably disgusting milk. 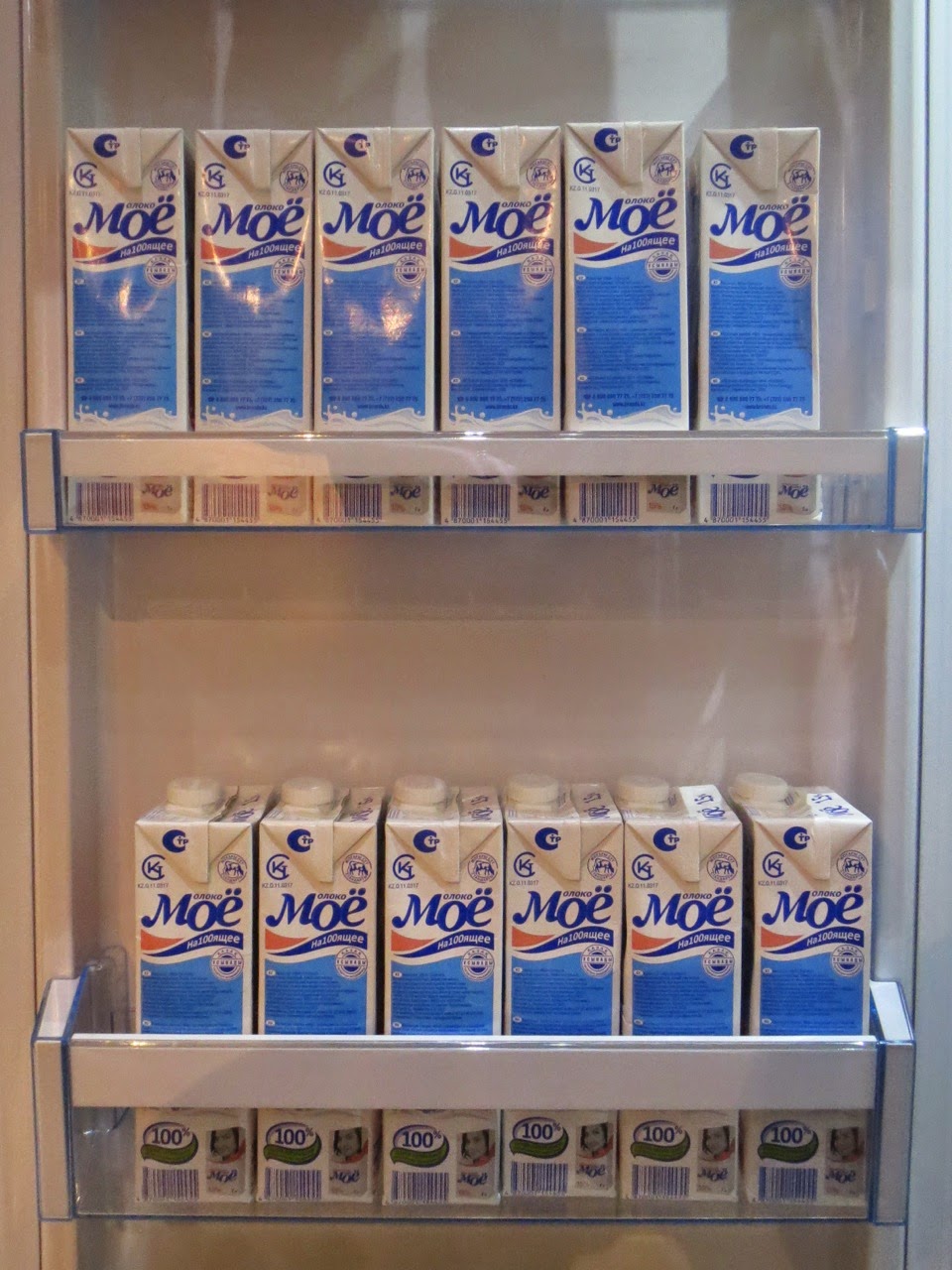 One day while perusing the refrigerator case (you never know what you may find - once I found marscapone cheese), I noticed some bottles of white liquid that looked suspiciously like milk.  Thankfully 'milk' in Russian doesn't contain any of those tricky letters that look like they should be English but aren't - the ones that turn 'restoran' into 'pectopah' - and so I could read the label, 'moloko.'  It looked close enough to milk for me and so I hauled a few home for Brandon's inspection (instead of intelligently bringing a Russian dictionary with me or even learning words for things like 'cheese' and 'yogurt' I just drag random food items home and make Brandon read the labels for me.  This is how I once ended up with starchy fruit drink instead of raspberry jello).

I had heard a rumor of fresh milk, but my informant claimed that it wasn't pasteurized and went bad quickly.  So when Brandon came home that evening, I shoved a bottle of 'moloko,' complete with pictures of serenely grazing black-and-white holsteins, at him.  "This looks like milk.  Do you think it's pasteurized?"

He glanced at the bottle.  "Well, what does it say on the bottle?" and pointed at an extremely long word.  I shrugged my shoulders.  I'm working on my Cyrillic, but it's a lot easier to have someone who already knows Cyrillic to read it for you.  He rolled his eyes and read it out.  "Pasteurized.  At least that's what the bottle claims.  There's only one way to know."  He cracked open the bottle and passed it around.  We all took a swig.  That way we could all die together and not leave anyone a fabulously wealthy orphan who would misspend the life insurance money in a life of dissolution.

The next morning everyone was still alive so I headed back to the store for ten more liters.  Not only was the milk tasty - it doesn't take much to be tastier than UHT - it also cost $1.23 less than UHT.  And it had a higher fat content, a deliciously creamy 2.5%.

The only problem with buying fresh milk was having to restock the refrigerator several times a week.  We probably go through at least fifteen or sixteen liters of milk (more when I'm making mozzarella cheese) and that's a lot of milk to get at one time, especially when it doesn't keep particularly long.  After my double baby jogger arrived from storage it was a little easier to get all of that milk home, but it's still troublesome to be tied down to the store by one's need for milk.

A week or so after still not having died, I stopped by a friend's house after loading up on milk.  I was raving about finding fresh milk (can you believe it?  Fresh!  And cheaper than UHT!) because that's what American women do when we live overseas - we talk endlessly about food and where to find it - when her housekeeper mentioned that she got fresh milk delivered to her house.

I had heard of fresh milk deliveries before - I got woken up by the milk man's horn the morning we arrived in Dushanbe - but didn't know how I could arrange one of my own and how much they cost.  I had been tempted to run out in the street and chase after the man with his horn, but I'm not sure even my superior mimery skills could pull off "I need fifteen liters of milk every week delivered to my house.  How much will it cost?"  And even if they could, I think that the milk man would be so confused and flabbergasted by the sight of this white - really really white - lady waving her hands at him and speaking too loudly to pick up on the masterpiece of mimery that I was laying out for him.

She stepped back and answered my questions one by one. "As much as you like.  Four or five days.  Four somoni a liter.  I'll have your housekeeper set up a delivery for you."

Last Tuesday, my doorbell rang.  Standing outside my gate was a woman with two large bottles of my very first delivery of fresh, unpasteurized Dushanbe cow's milk.  I brought it inside as the children crowded around, always happy for something new to ask endless questions about.  They watched as I carefully poured the milk into a pot, set it into a double boiler and turned the heat on.  After the milk reached 145 degrees, I turned the heat down and let it sit for half an hour.  Then I put it into a ice bath, cooled it, and poured it into washed bottles.

At dinner, we all took our first swig together, again.  No orphans in this family.  Most pronounced it drinkable, and I pronounced it $2.03 a gallon cheaper than the milk we had been drinking.

The next morning, we were all still alive and free of any intestinal distress.

Labels: Living in Dushanbe, Living with the Foreign Service

Success! Well done!! Only in one location did we have a milk delivery and it was because I chased the truck. I like your method better!

When I read unpasteurized, I almost skipped to the comments to write a scorched earth comment about that being the worst possible idea in the world. And then I saw that you pasteurized it yourself.

Thanks for pasteurizing it - having known at least two dozen children who have died and/or had strokes/permanent kidney failure requiring transplant, I would disown you if you fed unpasteurized milk to your children.

I actually don't think there is anything I feel more passionately about.

I think I went to you blog a long time ago. You said you are from Arizona. Are you from the Sherwood Family that settled there in 1880 in St. Johns, Arizona?
I am a descendant of William Sherwood. Might you be a descendant of John Sherwood? I am working on Sherwood Family History at the present time. If you want to answer could you please e-mail me at yship@aol.com.

Kudos on pasteurizing your own milk. Dad remembers that Grandma Henderson had some sort of machine that pasteurized their goat milk. We drank the milk from our cows raw. You know Grandpa and Grandma Hassell, always living on the wild side. 😊.