Sledding season has officially begun.  It actually began a few weeks before Christmas when Dushanbe got nine inches of snow.  But the sleds we had ordered for the children were supposed to be Christmas presents, so 'sledding' was more like 'sliding on your bum down a hill.'  But then everyone got sleds for Christmas, so sledding season began the day after Christmas.

We went sledding once last year, and were informed that we weren't at the right spot for sledding.  So I did some Google Earth-ing and a fall drive-by of the better place so that we'd be ready this winter for great sledding. 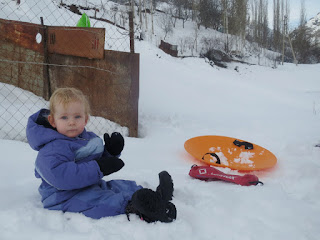 And it's been some great sledding.  We went again on Saturday and confirmed that yes, we had found the perfect spot for sledding.  It's in an east-west canyon on a north slope that is shaded from the sun, and so keeps its snow for a long time.  There is a good place to park (!!!) and the run-out is into an empty pond basin so nobody will ever fall off the edge of the canyon into anywhere.  Nobody's house is next to it, and the hill is steep, long, and smooth. 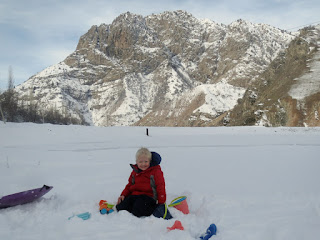 We brought sand toys on Saturday, and those who didn't want to sled (or wanted to rest) played in the snow while everyone else had a great time catching air as they slid down the hill.  We haven't built a jump yet, but I bet we'll get one by the end of winter. 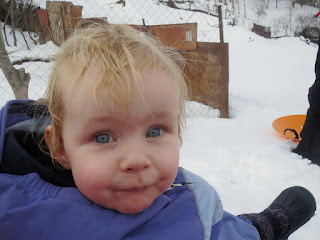 Eleanor, after two runs of snow in the face, is not a fan of sledding.  But she's fine with just looking cute. 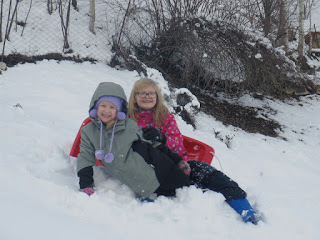 The girls, of course, love sledding and don't complain when they get snow in the face. 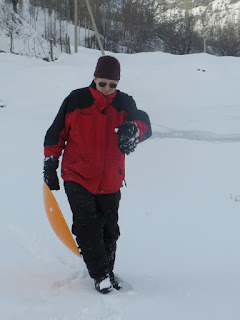 Brandon even gets to sled, and we've taking a couple of runs together that have involved some air.  I supposed we have quite a bit of body mass to hurtle down fifty feet of hill. 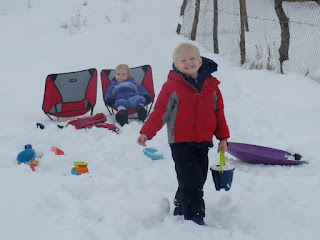 Twenty minutes into our last visit, a couple of local boys showed up and we lent them the use of the sleds.  They had a great time sliding down the hill, and then had a fantastic time playing with the toys (complete with truck sounds.  It must be universal) and thoroughly enjoyed pulling each other and the children along in the toboggan sleds.  "Weren't you here a few weeks ago?" they asked Brandon at one point.  I'm pretty sure they're going to keep an eye out for us next time it snows. 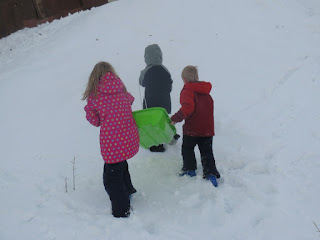 We all had a great time until I remembered the pot of beans on high on the kitchen stove.  Then we had to leave.  But we'll definitely be back.

Posted by Sherwood family at 10:22 AM

I'm trying to decide which is more awesome: the camping chairs, the sand toys, or the actual sledding. Here's to months of sledding!