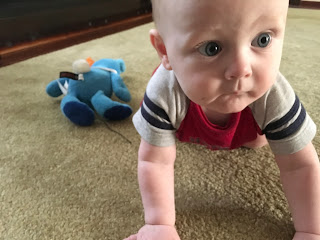 But I am a lazy parent.  I never have been good at entertaining children, even back when I was paid good money to do it.  If the parents of my babysitting charges told me that bed time was at 8, I usually had them tucked in by 7:45 and was down on the couch by 8 with the treats I'd found in the cupboard, watching Nick at Nite.

So one of my least favorite babyhood ages is that gap between when my children are awake for more than forty-five minutes at a time (six months old) and when they start crawling (usually nine to ten months).  I will set up a ring of toys all around the child, everything within reaching distance, which usually buys me twenty minutes of peace before they push all the toys away and then have a fit because there aren't any more toys to play with.  Then I have to run back over and push all the toys back for twenty more minutes of peace.  I have experimented over the years with all sorts of toy-containment devices to buy me ten or fifteen extra minutes, but none of them have worked very well and in the end I just have to patiently wait until they can learn to crawl.

Because when they can learn to crawl, their entertainment needs are met into forever.  Bored of the toys you're playing with?  Well, just go find some more!  See something interesting off in the distance?  Go and find out what it is!  The world is your oyster when you have the power of mobility.  This continues on until adulthood when you have the cash and ability to go anywhere in the world you want.  And truly it is fantastic.

Usually my children start their adventures in mobility with the backwards push.  It works particularly well on hard-surface flooring and inevitably ends in the child being jammed underneath a piece of furniture, crying for someone to come and release them.  After awhile the backwards push morphs into the army crawl, the child not yet having realized that those things hanging off the bottom of their torso are for anything but kicking mom when she's trying to change their diaper.  And finally, full crawling emerges and if it's winter, the jeans can never be used again for the holes.  Or if they are Edwin's jeans, one leg has holes and the other is perfectly intact because he only ever realized that one leg worked.

William has been different from my other children.  It started in the womb, where he would hold hours-long dance parties in the middle of the night, often kicking his father in the back.  When he came out he never stopped, wiggling constantly for seven and a half months.  I'm hoping this will translate into some amazing athletic ability, but I'm not researching sports scholarships yet.

So it was no surprise when just at his sixth month birthday he skipped the backwards push and army crawl, pulling himself up on his hands and knees to rock back and forth endlessly.  Rocking is one of his favorite activities.  It took him awhile to figure out what advantage this new ability gave him, and for awhile he would get up on his hands and knees, lean forward, and then collapse.  He could inchworm his way across several feet of carpet to snag an appealing toy or electronic gadget, but he hadn't yet realized what it meant.

But this past week he has finally put everything together and will take off across the floor the second I put him on the carpet, usually in the direction of the transformer.  This afternoon I was sitting on the second floor while the children were rowdily playing upstairs.  Intrigued, William took off towards the third floor and stopped forlornly at the stairs, clearly wishing he could join the fun.

There are no endpoints in child development, so William will soon learn the magic of climbing stairs (and have to learn the hard lessons of going down the stairs), pulling up on furniture, and finally walking.  Then he'll join the herd and never be bored or lonely again.

Hooray for mobility!
Posted by Sherwood family at 6:00 AM