My phone rang Thursday afternoon while I was feeding children lunch (one of the least favorite parts of my day) and it was Brandon.  "Question for you," he asked, "Do you want to take the kids to the circus?"

Circuses are a lesser-known remnant of Soviet culture.  Every large city in the former Soviet Union has a dedicated circus building and they're still being used today.  There are various circus troupes that come and tour and when they come into town, there are enough people who like circuses to sell out performances. 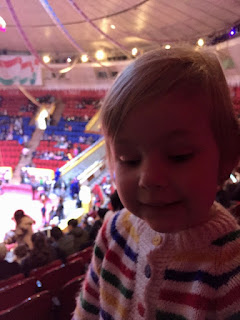 I had seen an email going around about the Uzbek circus being in town and had wanted to go, but I was too lazy to do anything about it.  There is no such thing as online ticketing here, so you have to go and buy the tickets on some other random day and we're halfway across the city (a ten minute drive!) from the circus.  So, when Brandon called, I was happy that he was randomly at the circus to buy tickets.  He had been out going to a meeting that was close to the circus and one of his colleagues had gone to buy tickets so he figured he might as well buy tickets, too. 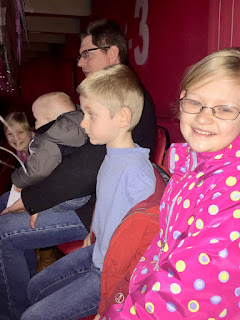 We went to the circus in Baku, so this time I knew what I was in for (no elephants, lots of acrobatics, and good seat pretty much anywhere in the house).  But it was also interesting to see what was different about the circus here.  Baku had lots of stilettos, flesh-colored leotards, bleached blonde hair, and sparkles.  The Uzbek circus was much more toned-down and less flashy, with nary a stiletto in sight.  The show was started out by the performers dancing to traditional music in traditional Uzbek costume (which looks pretty much exactly like traditional Tajik costume).  The women all had lovely long, dark hair and didn't show much skin past their shoulders.  The music was also a mix of booming loud club-style music with an occasional American song thrown in ("Cotton-Eyed Joe" bought me back to my teenager-hood). 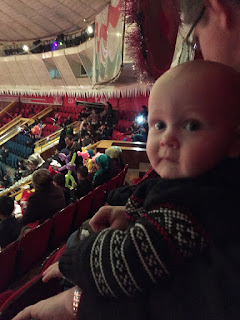 But it was still an entertaining mix of acts.  We got to watch a lady doing tricks on a swinging rope, dog tricks, monkey tricks, pony tricks, and a llama (which didn't do any tricks).  There was a juggler, hula-hooper (which ended with a flaming hula hoop - always awesome), rope trick lady, whip-cracking man, and a tight rope walker.  He was pretty impressive - finishing his act by crossing the wire with two women sitting on his shoulder and one standing on his head.  We also enjoyed ladies swinging around on long sheets and men balancing ten-foot poles on their heads while women did handstands on top of the poles.  It was pretty awesome. 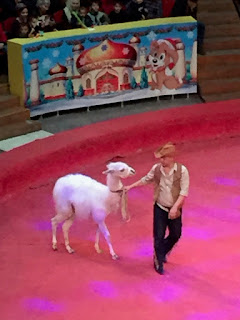 The children enjoyed the whole show (with the exception of William, who was not okay with having to sit on someone's lap for almost three hours - that's what we get for letting him sleep through church), along with all of the other children who had come for an afternoon of entertainment.  I won't be surprised if the children start getting a little more creative with their swing set and jungle gym, and I'm pretty sure Eleanor and Joseph will start going to the circus during their play time.

I enjoyed it too, when I wasn't wrestling William.  I don't think watching people do amazing tricks ever can really get old.  It doesn't matter if you're watching it at the Cirque to Solei in Vegas, on YouTube videos, or in an old Soviet circus building surrounded by a thousand of your closest Tajik buddies.  A circus is still a circus.  And it's always a good show.
Posted by Sherwood family at 10:19 AM