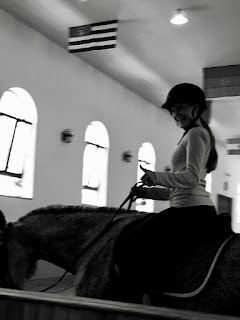 Last Tuesday afternoon, I woke up from my nap and put on my riding tights.  After checking on the children (get your school work done! And please get William up from his nap when you hear him cry), I got in the car and drove to the stable all by myself.  This past Tuesday I worked on cantering from the walk (I'm terrible at it) and I rode an Akhal-Teke mare, Rursi, who had a lovely, smooth canter.  When I got home from my lesson, I folded laundry.

I've discovered that, even though I'm a full-grown, responsible adult who has six children and runs a household in a foreign country, I still am the same five year-old girl who loved horses.  It's funny to realize that even though you grow up, some of those childish passions don't ever go away.

And as I started riding when the children began lessons once a week, that same passion came right back.  After riding for a few months, I realized that I knew all of the basics of riding (walk, trot, canter, jump), but wasn't particularly good at any of them.  There's a point in one's progress in anything that improving is less a matter of gaining more knowledge and more a matter of spending more time practicing.

When I broached the topic of riding twice a week instead of the once I was already doing with the children, Brandon was confused.  "But aren't you already riding horses?  Once a week is more than none a week, which is what you've been doing for the last two decades.  Why do you need to ride twice a week??"

After I explained to him that I wanted to get better and getting better was a matter of spending more time practicing, he warily agreed that it was maybe okay to spend a hundred dollars a month of his sweat-and-blood money on something completely frivolous like riding a large quadruped in a circle for forty-five minutes at a time.

I thanked him profusely and promised that I'd still get all my mom jobs done.

I've been riding twice a week for half a month now and it has been wonderful.  Most of my time is spent doing Very Useful things.  I wake up at five in the morning to exercise, after which I shower, eat breakfast, tidy up the house while overseeing the children's morning chores, teach and supervise school, feed children lunch, take a short nap, read scriptures, study Russian vocabulary, take Russian class (three times a week), take care of household business, cook dinner, eat dinner, clean up dinner, and put the children to bed.  The only part of my day that I really enjoy, that isn't a job which takes moral fortitude to do, is my nap.  The rest of my day, every single minute of it from five am until seven thirty or eight, is spent doing my job.  I'm not complaining about it; this is the life I've chosen and the one I always saw myself doing.  But it is a very busy life and it's a life busy with mostly taking care of other people.

So to have the opportunity to do something that doesn't benefit anyone but me, that doesn't make me a better person or make the world a better place, something that is simply for my very own enjoyment, is so amazingly indulgent.  I had a struggle with my conscience when I first realized that I could ride twice a week without shorting my children of any time I needed to spend with them.  I couldn't find any justification for why this would be something that was good for anyone but me, and it was a lot of money to spend just making me happy.  It was even harder to justify it when I thought about Brandon who was stuck at work for at least fifty hours a week with no opportunity for self indulgence himself.  Nevertheless, I decided to ride anyway because it was something I wanted to do even if I couldn't justify it even to myself.

But I've found that being able to do something that I really, really enjoy doing has made all of the things that I enjoy less (or sometimes not at all) much easier to do.  I don't feel like my whole life is spent doing the things I have to do now that I get to spend a little bit of time doing the thing that I really love to do.  I look forward to riding every day and count down the days until my next lesson, and it's wonderful to have something to look forward to so frequently.  I'm also grateful that Brandon doesn't resent me for doing something that he doesn't have the option to do.

I know I'll never become anything close to a professional horsewoman, but that's because I have something else that I've dedicated my life to - and my family is more important than any hobby that I have.  But I also know that I'll have something to enjoy and improve at, and that is pretty great.
Posted by Sherwood family at 11:16 AM