I like street food.  A lot.  When you get it from the right places, it's very fresh because they're constantly making it.  It's also really easy to get - you can drive (or walk if you're really lucky) right up to the stand, buy your food, and walk away.  No need to mess with menus or waiting around for restaurant orders or waiters.  It's also really cheap - we can usually feed our entire family for less than ten dollars.  Take that, fast food.  The last time we ate at Wendy's it was $25.

I know that eating street food is risky, but I've gotten sick from more often from restaurants than from street food.  Also, I'm lazy and cheap and don't mind taking risks if they usually pay off.  Plus, street food can be really tasty.

Here in Tashkent, the most common street food is somsas.  Somsas are very unique to this area (in Tajikistan, they were called sambusas), and are quite yummy - especially when they're hot.  They have a flaky pastry wrapped around a filling which is then baked inside a tandir oven.  The most common filling is meat, either ground or in chunks, but I've also had potato and (my personal favorite), diced pumpkin.  Until you've had a somsa, you can't quite grasp the amazing deliciousness, and if you're live in any but a few cities in the U.S., you probably won't ever get the chance.

Somsa stands are everywhere here - on semi-major streets, there are somsa stands about every hundred feet.  They're pretty easy to set up - get a tandir oven and a gas connection and you're in business - so they must be every other Uzbek's dream of a small business, to judge by how many there are.

About half to two-thirds of the somsa sands seem to be defunct whenever I drive by them, so I've stuck to a stand that is about seven or eight minutes away from our house.  Their somsas have always been tasty, they're always open when I go to buy somsas, and they always have them.  It's this amazing business model - have food when people want to buy it and they'll come back to you for repeat business.  Crazy.

This last week was the big holiday of the year - New Year.  The whole country has work and school off and it's time when everyone is visiting family or out and about.  We spent the holiday days (the embassy had already given everyone three days off even before the shutdown) cleaning the house in our annual Put Everything Back Where It Belongs celebration of the New Year.  To celebrate finishing, we took the children to a local trampoline park.  The winter so far has been very cloudy and rainy, so we've had to take our fun inside.

The children finished their hour of jumping right around lunch time, so I hit on a wonderful idea - stop by our local somsa shack and get some hot, flaky somsas for lunch.  All of the children were happy with having a yummy meal and I was happy to feed everyone for about seven dollars.  It was a brilliant plan.

When we got to the somsa stand, the man at the window indicated by waving at the covered oven that they somsas weren't finished yet.  It was cold and I didn't want to wait for an indeterminate time (my Russian fled me when I tried to remember how to ask 'how long'), so I hopped in the car and we drove to the next stand, about 150 feet down the road.  This one had a lock on it, so we figured that meant closed and did a u-turn to circle back to our original stand.

By the time we returned, there were two or three men waiting for the fresh somsas.  As we watched, three or four man joined the crowd.  Sophia, who really wanted somsas, decided to claim her own place in line and made Kathleen join her.  I didn't want to stand in the cold, so told myself I was letting my children learn to be independent.  By the end of ten more minutes, there was quite a crowd milling around and we were starting to get nervous.  I tried to calm everyone down.  "These are just individual people," I told the hungry crowd, "they're probably only buying a few apiece." 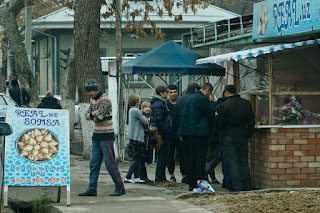 I cheered the girls on as they detirminedly pushed their way to the front of the crowd - they've definitely learned the art of the shove while living in this part of the world.  But as bag after bag and basin after basin walked away with hot, fresh, meaty, flaky somsas and the girls never got any, my confidence flagged.  After all, a tandir oven can only hold so many somsas.  By the end there were no people and the girls came back empty-handed.

"We kept telling them we wanted двадцатъ, but nobody paid any attention to us!  They kept talking over our heads and taking all the food," Sophia told us dejectedly, "When we got to the front and asked for twenty, the guy at the window laughed and said he had only two.  Then someone else bought those two."

I told them that they had done a good job and it wasn't their fault that they were two short girls in a crowd of somsa-hungry men.  The boys made up all sorts of insults for the people who took our somsas.

We decided to press on.  The next stand was fresh out, but we decided we weren't going to give up until we found somsas.  We headed to another area and drove around looking for stands.  We found plenty of stands, but not a one was open and finally, after an hour of seeking somsas, we went home empty-handed and dispirited.  We thought briefly about returning to the first stand for the next batch which was probably ready by then, but were too disheartened to try again.

It would have bad enough if all of the stands had been closed or even if they had all be sold out.  But to wait twenty or thirty minutes, all the time tasting that crisp of fresh pastry and imagining the savory meat juices fill your mouth, only to watch those somsas fill someone else's bowl, is worse.  And to know that they could have been yours of only one person had stopped to let a few little girls who had gotten there before them get some somsas, is even worse.  And worst of all is to know that you could have gotten those somsas yourself if you had been a little less lazy.

So, lesson number one for the day is this: don't try to buy somsas the week of the New Year.  Everyone wants them and it's just easier to cede the field to the locals.

Lesson number two: In a shoving match, grown men will always win over little girls.  Especially when it involves meat.
Posted by Sherwood family at 10:53 AM