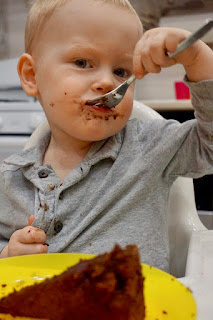 This weekend William turned two.  I remember older mothers telling me - when I was a new, young mother - that the time just goes so fast when your children are little.  At the time it felt like my days were endless and my years eternal and I wished that time would hurry up a little because I could only take so many more days of crying, diapers, incessant questions, and constant messes.

I am officially an older mother now because the time has gone so fast.  A few months ago, Facebook showed me a memory of William's baby shower, and I caught my breath when I realized that it was two years old.  I really thought for just a few seconds that he had been born only a few months ago. 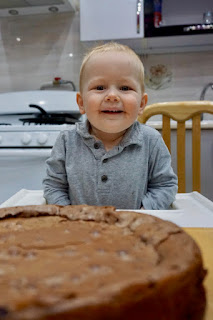 But William is definitely not a newborn anymore.  He is (fortunately, unfortunately) fully ambulatory and can climb just about anything to reach interesting items like my medicine cabinet, food left out on the counter, the knives on the knife strip, and the children's candy stashes.  He can also, sadly, open doors by himself.

Although not as conversational as his older sister Sophia was at two, he's pretty verbal for a Sherwood.  I find him to be quite clever with his limited vocabulary; although he might not know the word for a particular thing or action he wants, he works very hard to make sure he gets his point across.  When he wants someone to turn on the faucet to enjoy the perennial two year-old classic of playing with the water, he requests, "Please, open it," in his chirpy little voice.  Cinnamon rolls are requested with, "Please, have it, cakes," and if he can't get you to understand what he want,  he simply grabs your hand with a grunted, "Come on!" and takes you to whatever he needs help with. 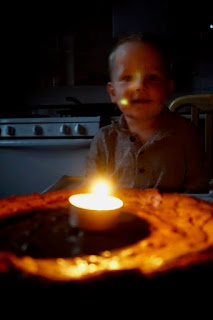 He is adored by his siblings, and often I'll look outside to see him in a stroller being pulled by his siblings who are hitched up as his carriage horses while he calmly sits and sucks his fingers.  One day his world will undergo a serious shift when he realizes that everyone else's world doesn't revolve around him and everyone wasn't created to adore and worship him.

We kept William's birthday celebrations pretty low-key because he's two years old.  I took the five other children ice skating for a church activity yesterday and William got to spend his birthday home with his father.  We did eat pizza, however, while watching Mary Poppins and he does enjoy his pizza.  He got to drink as much as soda as he wanted because, birthdays. 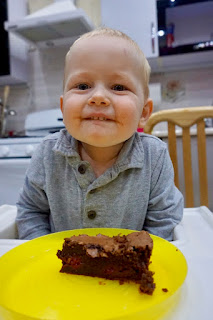 Today I made him a chocolate cake (always a good idea until they start eating it) and we sang "Happy Birthday" to him.  He was quite delighted with the candle and very happily blew it out, followed shortly by demands for cake.  And since it was his birthday, we gave him a second piece as his birthday present.

We're very happy to have William in our family and I'm happy to have a two-year old again as that age is my most favorite of the younger ages.  Happy birthday, William!
Posted by Sherwood family at 10:24 AM