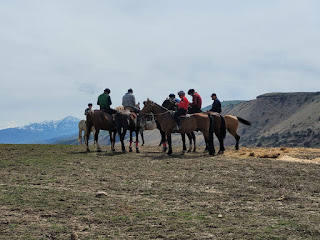 Brandon and I have wanted to go to a buzkashi game ever since we first heard about them before moving to Dushanbe.  Buzkashi is a Central Asian game that is played by riders on horseback trying to get a goat carcass through a goal.  It's a pretty unstructured game, without formal teams or even set numbers of players, and usually played on an open field out in the mountains. 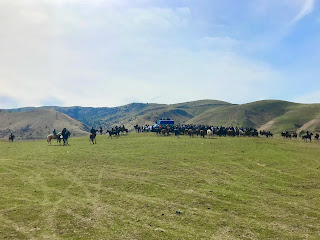 The games themselves are notoriously hard to find, as they are organized fairly spontaneously, depending a lot on the weather and inclination.  The sport is only played in the spring, around the Zoroastrian holiday of Navruz, and so there's a very narrow window of time to both hear about and be able to attend a buzkashi game. 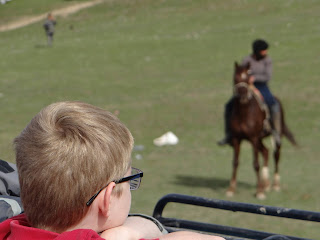 In Dushanbe, we would usually hear about games after they had happened, or the games that we did hear about happened on a day we couldn't attend.  Often then would be held an hour or two away from the city in a location that seemed to be randomly chosen.  All of the information was spread entirely by word of mouth, and if you didn't know someone who knew someone, you were out of luck. 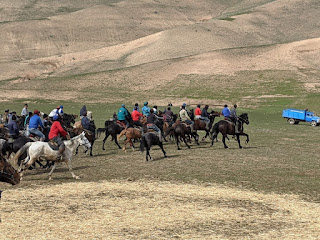 So far we've had the same luck with games here in Tashkent.  We heard about a game last year, but it was right at the beginning of COVID and just after Elizabeth got out of the hospital, so that game got missed also.  This is our last year in Tashkent, so when my Russian teacher started organizing a group to see a game this spring, I made sure to be part of it. 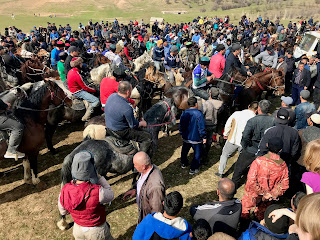 We didn't know when it would take place because there needed to be a window of clear weather, and this spring has been pretty rainy.  There was talk of maybe the weekend of Navuz, but nobody knew for sure.  On Sunday afternoon, we got the news that Monday was the day.  It happened to be a holiday for the embassy also, so Brandon was already off work.  I told the kids that it was an impromptu holiday, we packed lunches, and then headed off into the mountains. 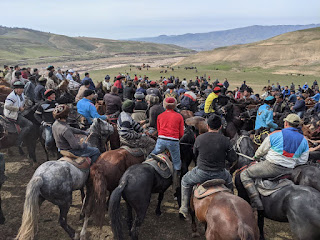 We had to wait as the local khohim (regional governor) kept changing his mind about whether or not we could go because of the pandemic, but eventually he either got enough of a bribe, decided that we were okay, or just got tired of being bothered, and we were given permission to go.  There were about forty people from the international school and the embassy community, and we all loaded into the backs of big trucks to make our way up to the buzkashi field, a somewhat level sheep grazing ground up in the mountains. 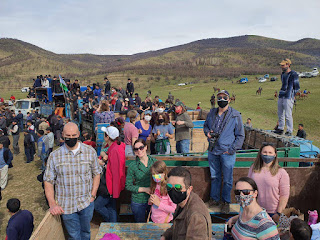 When we saw the hundreds of horses milling around, we were all happy to be safely in the back of a truck, parked on the edge of the action.  Several times the horses got close enough to bump up against the truck and the spectators milling in front of it had to quickly scatter before they got trampled.  Brandon and I were also happy that we had left all of the little children in our party home with the housekeeper. 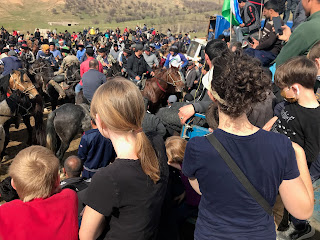 The game was a series of rounds, with each round ending when someone managed to get the goat carcass into another truck at the opposite end of the field.  I hadn't ever considered exactly how heavy a goat carcass was until I watched the men try and wrestle it down the length of a field while on the back of a galloping horse.  The goat would frequently get dropped and then the riders would surround it in an increasingly large scrum of horses, men, and whips so thick that we couldn't even see the carcass.  My respect for buzkashi players increased tremendously as I watched them lean down from their saddle in the middle of constantly moving horse legs and then haul the carcass up before breaking free from the pack to gallop wildly down the field.  The carcass itself didn't last through too many rounds of dropping, trampling, and pulling before it had to be replaced with a new one. 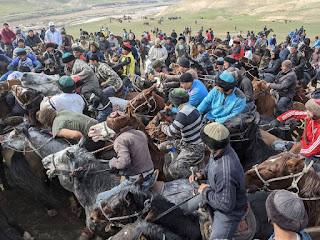 At the end of each round, the winner would go up to the organizer truck to fetch their prize, which could be a variety of things.  I saw money change hands, live goats handed over by the scruff of their neck to be hauled off by horseback, a very doleful sheep, and even a long rolled carpet wrapped in tape.  I felt a little like I had stumbled onto the filming of a Central Asian version of Lawrence of Arabia.  At the end of the match, I saw several of those goats and sheep being unceremoniously stuffed into the trunks of Ladas for the trip to their new home. 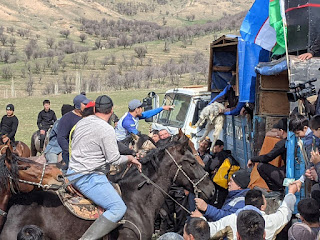 The children all enjoyed their impromptu holiday, which was helped by sharing the truck with the other family who has church with us.  Everyone enjoyed a picnic in the truck, watching the horses, petting the goat in the truck next to ours, riding in the back of the truck as it bumped its way up and down the rutted mountain track, and wandering around the hills around the field.  As we were jolting back down the mountainside to our cars, one of our friends pointed out that for our children this is just another day for them - have a holiday, go watch hundreds of men on horseback chase after a goat carcass in the mountains.  But for their peers back in America, it would be wild beyond imagination.  But I guess that's the upside of this crazy life, experiencing things that you couldn't find in the US even if you tried. 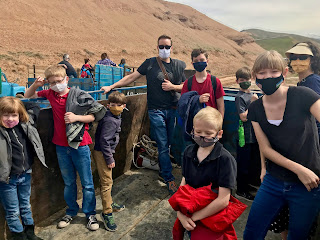 By the end of the match, about three or four hours after it started, everyone had had a great time and was ready to go home.  We joined the streams of horses and men going back down the mountainside, heading home after the game.  Brandon and I both agreed that it was a pretty amazing day, and that buzkashi is a sport that has to be seen to be appreciated.  But after watching the shoving, whipping, grabbing, lunging, pushing, and straining that all the players were subjected to, it's a sport that I will never participate in myself - I'm perfectly happy to just watch it.

Posted by Sherwood family at 12:08 PM

I can't tell you how completely diverted I was reading this post. Incredible opportunity! So happy your buzkashi dreams came true!