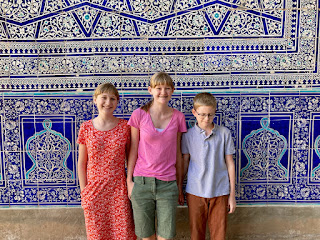 A few weeks ago, I was able to take Kathleen, Sophia, and Edwin to Khiva, the smallest of the Silk Road cities.  My aunt and uncle came out for their own Silk Road trip, so we decided to go with them for the first of the three stops.  We haven't taken any of the kids to any of the cities while we've been here, so when the older kids asked if they could go to Khiva, I thought that it would be fun to combine our visits and go together. 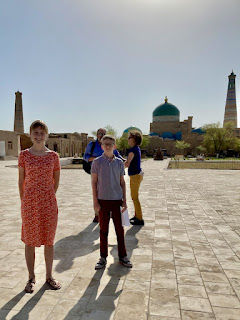 Khiva is in the western end of Uzbekistan, so we had to fly and then take a car from Urgench, the closest city with an airport.  Flying domestically with only three children who are all old enough to be completely reasonable was so much more enjoyable than our usual international monkey circuses.  The kids kept on saying, "Mom!  This is so easy with only three of us!  It's so quiet!  Nobody's whining!  We can all carry our own boarding passes!" 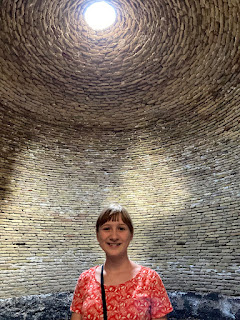 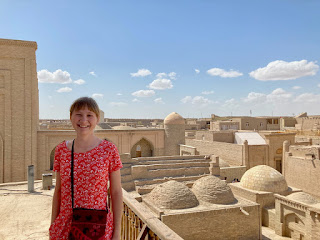 We got into Khiva late Monday night and then spent all day Tuesday touring the small walled city.  There is a a lot of Khiva that is outside the walls, but most of the interesting sights are inside the walls.  Everyone has their favorite silk road city, and usually it's either Bukhara or Khiva.  Khiva is my favorite, so it was fun to come back with the kids and my aunt and uncle. 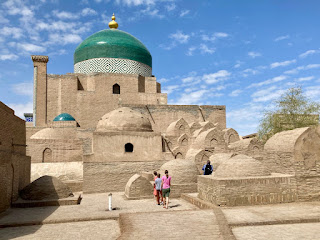 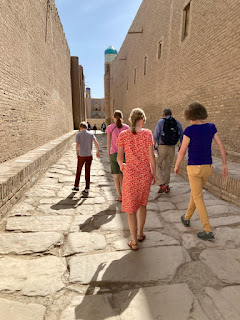 The entire walled city was declared a UNESCO world heritage site in the nineties, and it's easy to see why it got that designation.  The inside of the city is packed with madrassas, mosques, and old palaces.  There are so many madrassas that a good number of them stand empty, locked up because nobody knows what to do with them.  I'm not sure what was happening back in the nineteenth century in Khiva that made madrassas the popular thing to build, but I'm pretty sure I've never seen so many crammed in so close together anywhere else. 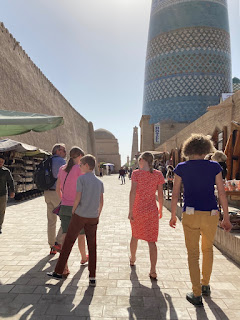 The weather for the day was one of those perfect April days that makes being in Uzbekistan during the spring a delight.  It was clear and sunny and all of the trees were leafed out in the fresh, bright spring green of new growth that hasn't gotten tired and dusty from a long, hot summer. 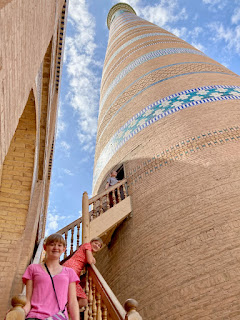 Foreign tourists were far outnumbered by school groups who had come to tour Khiva for field trips.  I've found that Uzbeks love visiting their silk road cities every bit as much, if not more, than everyone else.  My uncle had taken Russian back when he was in elementary school, so he enjoyed bringing out his few remembered words every time we got mobbed by school groups who wanted to know where we were from and if they could take a picture of us.  He loved it all, soaking in all of the cultural experiences he could cram in for their week-long visit. 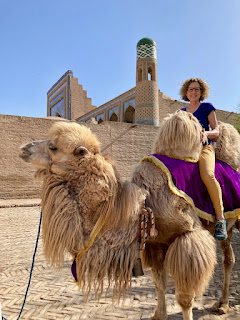 Sophia spent the whole day trying to get to places that weren't strictly part of the allowed sections.  At one mausoleum dedicated to a fourteenth century wrestler-poet, she managed to find a stairway that led to the roof.  By the time I slipped past the minder and up the staircase myself, she and Edwin had managed to climb up the back of the entrance facade and were enjoying their view of the street far below. 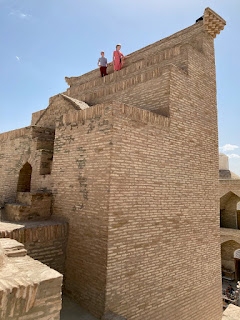 In an empty madrassa, she found the small staircases embedded in the wall that led to the second story.  When she appealed the authority figure - me - we agreed that if the doors weren't actually wired shut, we could slip through one and explore the second story.  She found one that was open and so we did some furtive stair climbing and quietly crept around the second story, exploring empty rooms.  Luckily we didn't get caught and everyone enjoyed a shared adventure. 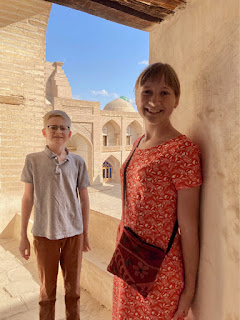 We finished our day with a walk along the city walls before heading back to Tashkent while my aunt and uncle went on to Bukhara by train for more silk road adventuring.  It was fun to be able to travel with children who were interested in what we were seeing and enjoyable company to have along. 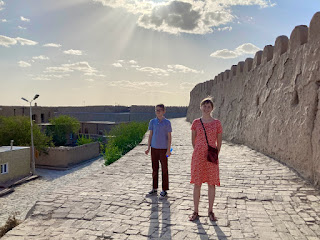 As we were waiting for the (inevitably) late plane home, I realized that sometimes our mostly normal lives have little detours into the exotic.  On Monday, Wednesday, and Thursday, everyone had school like we always have school.  Everyone did their Russian classes, had piano lessons, did math lessons, and complete homework assignments, just like any other kids their age back in the US. 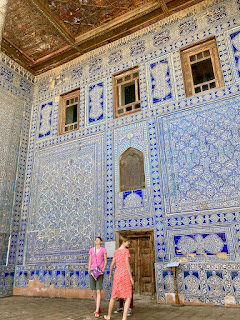 But on Tuesday, we took a short little jaunt to a Silk Road city where we wandered around in the inside of a tenth century mosque, climbed down into a madrassa cistern, walked along the ancient city walls, and admired tile work in the seventeenth-century palace of a khan.  It's fun to have some awesome in the middle of regular life sometimes. 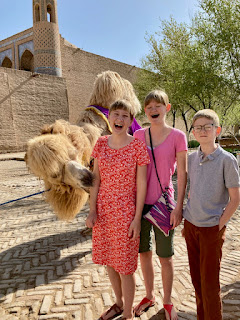 Posted by Sherwood family at 12:22 PM

Loved your post!! That was such a fun trip!!! You and your kids were great companions!! We love you guys and Uzbekistan!!!